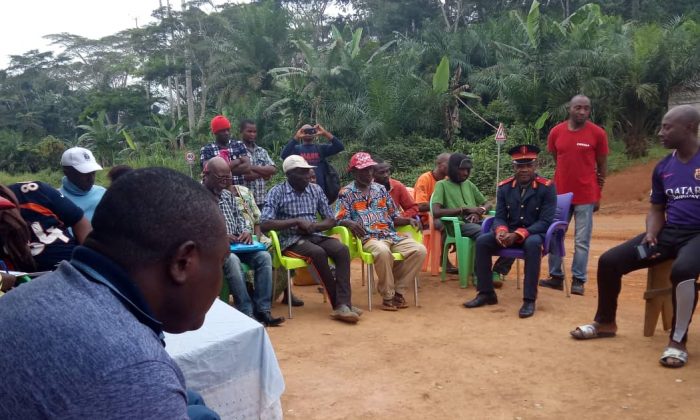 Civil society activists listen to members of the indigenous community affected by the Sudcam project in south of Cameroon on Nov. 18, 2018. The uniformed man is Akoumba Akoumba, a traditional. (By Amindeh Blaise Atabong/Special to The Epoch Times)
Africa

EBOLOWA, Cameroon—Activists say a company controlled by a Chinese-state owned conglomerate in Cameroon is threatening the biodiversity in the country and endangering indigenous people.

Since 2011, Sud-Cameroun Hevea (Sudcam) has replaced almost 25,000 acres—the size of Paris—of dense tropical rainforest with a monoculture rubber plantation. Sudcam’s expansion project has approached the Dja Faunal Reserve, a UNESCO World Heritage site, and has displaced locals from their land and resources.

According to Greenpeace, “Halcyon Agri is responsible for by far the most devastating new forest clearance for industrial agriculture in the Congo Basin.” Almost 25,000 acres have been cleared so far. The NGO fears if Sudcam is not stopped, an additional 49,000 acres of forest will disappear in the next few years, as the company has accelerated clearing at a rate of almost 1,000 yards a day.

Sudcam was granted two temporary five-year concessions by the government of Cameroon in 2008 in a land grant that seems to have violated Cameroonian law, according to Center for International Forestry Research. A 1976 decree specifies that applications to develop certain national lands can only be submitted for areas that are unoccupied or unexploited. But by the time Sudcam obtained its concession totaling 111,000 acres, the area was already covered by two logging concessions.

The Chinese-initiated rubber project has also been mired in irregularities. Sudcam is accused of having acquired, cleared, and developed the land without free, prior, and informed consent; which requires that indigenous peoples are entitled to give or withhold consent to a project that may affect them or their land.

The local populations don’t even know the limit of Sudcam’s concession. One family was denied access to their fish pond which was within Subcam’s concession. The aquaculture project, worth 50 million CFA Franc (about $87,000) was the family’s lone source of livelihood.

The area now occupied by Sudcam originally harbored the indigenous Baka pygmies who lived in the forest. Near the Dja Faunal Reserve, it was their ancestral home until the company encroached into their property and displaced them.

Like the Baka pygmies, many locals around the plantation say they were forced out of their ancestral land in part of the rich Congo Basin rainforest when the government leased it to Sudcam to develop a giant rubber plantation. Many say the compensation they received was very low, if it was even given.

The hunter-gatherers were forced to relocate to Edjom village, and the move affected their lifestyle and source of livelihood. According to the village head, Ekoto Joseph, the nearly 150 Bakas who relocated have increased the woes of the overburdened community, which is already suffering from the impacts of the rubber plantation. “It appears nothing was previewed for them.”

Essomba Cyrille, a resident of the village of Ndibissong, is among thousands who were displaced to give way to the Chinese project. A few years later, Essomba still thinks the payment of indemnities was poorly done. “Officials … came at night and people signed against amounts they did not see. Some received 2,500 CFA Franc ($4),” Essomba said.

He recounted how the administrative authority of the area coerced them into taking whatever was available, no matter how small the amount of compensation, and advised them to complain afterward if they felt unsatisfied with the amount.

Akoumba Akoumba Federic, traditional ruler of Ndibissong, near Meyomessala, said they welcomed the company with open arms, but the company didn’t fulfill its responsibilities. Besides dismissing the indemnification process as a sham, he claims no locals from his village were retained for any senior positions in the company. “The few who are there are just laborers,” he said.

Akoumba, like thousands of others, is worried that Sudcam took away their lands, and he now does not have land to farm on. “We are aware the forest belongs to the state, but our livelihood depended much on it,” he said.

Senator Pierre Flambeau Ngayap is one of the lawmakers who has seen the extent and severity of the Sudcam project. “We will establish responsibilities and go towards those who hold the solution to the problems of the people,” he told The Epoch Times after a visit to the project area.

The Chinese rubber expansion project is also said to pose a serious threat to biodiversity. The cleared forest had been home to significant biodiversity including elephants, highly endangered chimpanzees, western lowland gorillas, monkeys, and apes.

Sudcam officials will not grant reporters access to its plantation, and are yet to respond to a request for comments.

However, in a press release from Nov. 19, Halcyon Agri acknowledged there were legacy issues prior to their acquisition of Sudcam, particularly regarding access to land, limited space for local farming activities, and a concrete environmental management plan.

“As the world’s largest supplier of natural rubber and the owner of large plantation concessions, Halcyon understands its role and obligation to minimize impact on the environment while continuing to meet the growing demand for a raw material vital to modern life,” the press release stated.

Halcyon Agri has announced the launch of its Sustainable Natural Rubber Supply Chain Policy as well as a Sustainability Commission for Cameroon, which will ensure certain recommendations made by World Wildlife Fund for Sudcam are effectively developed and implemented.