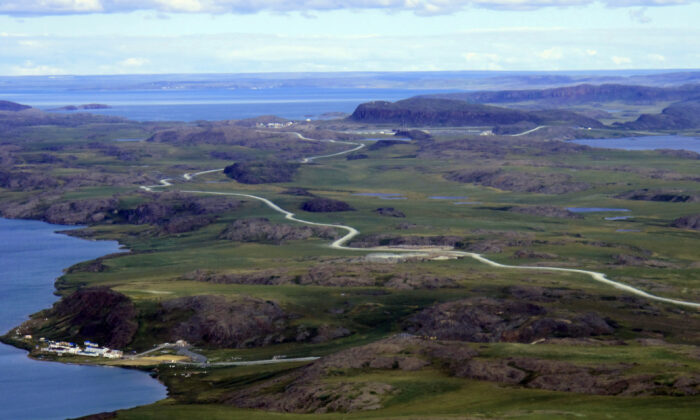 Aerial view of Hope Bay, Nunavut, where TMAC Resource’s gold mine is located, situated near tidewater in the Northwest Passage. (Timkal/CC BY 3.0)
Canada

State-owned Chinese mining company Shandong Gold’s proposed takeover of a fledgling gold mine perched at the fringe of the North American continent poses risks for Canada on economic and national security fronts, says a former contractor for the Canadian Security and Intelligence Service (CSIS).

“I share the grave concern of a growing number of Canadians galvanized by the continuing and extensive involvement of the Chinese dictatorship in our economic lives, particularly in the post-COVID world,” says David Harris, director of the intelligence program at INSIGNIS Strategic Research in Ottawa.

“The threat posed by Beijing to Canadians’ well-being is highlighted by this recent initiative that seems to have a possible predatory flavour, given the way in which state-backed buyers are poised to take control of a very significant strategic and security-oriented resource.”

TMAC Resources announced on May 8 that for US$149 million, or one-tenth the $1.5 billion cost to bring its Hope Bay mine to fruition, Shandong Gold Mining Co. Ltd.—one of the world’s largest gold producers—would buy the project located in northwest Nunavut pending federal government approval.

The deal has to be reviewed by Ottawa under the Investment Canada Act, in which foreign companies are subjected to more scrutiny during the COVID-19 pandemic to prevent “opportunistic investment behaviour.”

Gold has become a refuge for investors during precarious economic times, and for the past 20 years China has been expanding its reserves. Though Hope Bay’s gold production has been limited to date, Harris said the precious metal’s military utility and the mine’s location on the shores of the Northwest Passage present dual concerns.

“Gold plays a significant role when it comes to certain nuclear-related operations, and that’s not a minor issue given China’s muscular military orientation these days, and there’s the proximity question as a function of security,” he said.

“We have already noted the tremendous appetite China seems to have for securing varying degrees of control over a variety of dimensions of the Arctic.”

In 2013, China gained observer status on the Arctic Council, a forum of eight nations whose territory traverses the Arctic including Canada, Denmark, Finland, Iceland, Norway, Russia, Sweden, and the United States.

In 2018, the communist regime declared itself a “near-Arctic state,” but for years it had already been gradually establishing a presence in the region and engaging in energy cooperation with Russia. The regime is currently exploiting a North Sea shipping route across Siberia, and in December 2019 opened the 3,000 km “Power of Siberia” natural gas pipeline from Russia’s Siberian fields to northeast China.

A decade earlier, in 2008, China’s Jinduicheng Molybdenum Group had acquired Yukon Zinc’s Wolverine mine outside of Ross River, Yukon, but after three years of operation through sagging commodities prices, it shuttered the mine’s operations in 2015.

In 2020, two years after China’s “near-Arctic state” declaration, Jinduicheng, which bills itself as one of the largest molybdenum companies in the world, left Canadian taxpayers with a $25 million “near-Arctic” mess. The Yukon government appeared in the territory’s supreme court this January seeking compensation from the defunct mine’s bankruptcy proceedings.

On Jan. 9, weeks before the Yukon government was in court, the United States and Canada finalized a Joint Action Plan on Critical Minerals aimed at breaking China’s supply stranglehold on 20 of 35 minerals critical for the strategic defence, aerospace, and communications industries.

While the United States has banned Huawei 5G from its telecom networks, Ottawa continues to mull over whether to allow the company a role in Canada’s new 5G network. CSIS has taken a strong position against the idea, in stark contrast to the Communications Security Establishment, which believes any espionage or security concerns can be monitored and managed.

“Our closest ally and economic partner, the United States, has taken decisive views on this matter, and on that measure alone, one would have assumed long ago that Huawei would have been cut off from involvement in Canada,” Harris said.

As TMAC shareholders prepare to vote this June on the Shandong sale, the Chinese regime’s quest for gold in Canada’s hinterland continues. Individual speculators from the communist country have been sniffing around the historic Klondike goldfields for placer claims, according to one longtime miner.

“I met a bunch of them last summer actually, looking for mining ground,” said Stuart Schmidt, a lifelong placer miner in the Klondike.

“They were interested in some claims that I just bought and I toyed with the idea of selling, but instead I just decided to keep drilling them and not to sell.”

China was the top producing-gold country in 2018, at 399.7 tonnes. Schmidt’s operations, which employ around 30 people, produce around 6,000 ounces per season—a mere drop in the nation’s gold bucket. Even TMAC’s Hope Bay mine produced barely a fraction of Nunavut’s 365,000 ounces it recorded the same year. The majority of gold produced in the territory was at Agnico Eagle’s Meadowbank mine.

Different from hard rock mining that requires milling and chemical leaching to separate gold from ore, placer mining is a more accessible process that involves washing alluvial deposits from sediment trapped between bedrock and vegetation.

Schmidt suspects that the Chinese speculators he’s encountered are playing on the psychology of their prospective investors in the same way that lured thousands of people to the Klondike during the famous gold rush at the turn of the 19th century.

“If some promoter says he’s found an incredibly rich property down this river valley near where I’m working—like Bonanza or Eldorado rich—I’ll probably look at him with a healthy degree of skepticism,” he says. “But if he tells me it’s halfway around the world in some exotic mountaintop, or some African savanna, I’m more able to believe him.”

Schmidt added: “But if he says to Chinese investors back home that he’s got some incredible place in the Klondike goldfields in northern Canada, and Canadians are all stupid, don’t know what they’re sitting on, and we can go over there and make a lot of money, I’m sure there’s probably going to be some interest. Just like Canadian investors are interested in how they’re going to go to northern Brazil or Peru and make a lot of money mining gold.”

Aside from Ottawa’s review, the sale of Hope Bay must be approved by two-thirds of TMAC’s shareholders as well as meet the approval of the Kitikmeot Inuit Association, a business development organization that represents the region’s Inuit.

Harris believes that the purchase should not go ahead.

“When you ask me, ‘What do I say about it?’ I am almost chilled to imagine. I would assume that on its merits, this thing would be shot down, but again that is based simply on an interpretation of the Canadian interest.”

Richard Fadden, CSIS director from 2009 to 2013, told The Globe and Mail that the federal government should look at the proposed TMAC takeover with Canada’s national interest in mind.