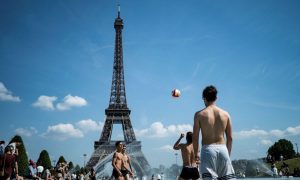 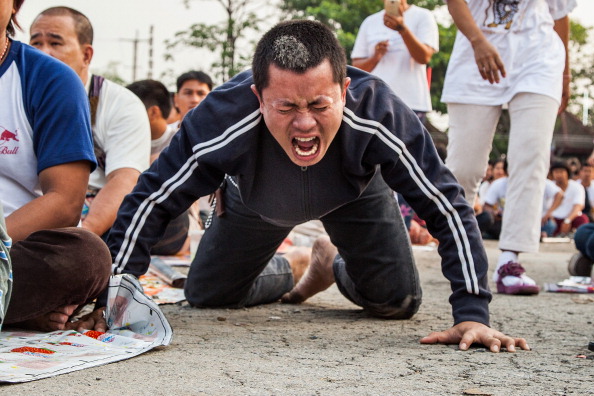 A tattooed Thai devotee reportedly possessed by spirits crawls as he tries to pay his respect to a statue during the celebration of the annual Tattoo festival at Wat Bang Phra on March 15, 2014 in Nakhon Pathom, Thailand. (Omar Havana/Getty Images)
China Human Rights

Chinese Company Forces Workers to Crawl Through Traffic as Punishment

A boss in China is drawing criticism for using ritual humiliation as punishment for poor productivity.

Female employees of a Chinese beauty company were forced to crawl along a busy public road as punishment for failing to reach their annual performance targets. They were led by a flag-wielding man and flanked by two other workers who recorded the ritual.

The confronting scene was captured on camera in Zaozhuang city in China’s eastern Shandong Province on Jan.14.

The public humiliation continued until police arrived on the scene, reported Chinese media outlet Sina. The leader of the team was issued with a verbal warning and local authorities ordered the company to close for a period of self-reflection.

Chinese web users were swift in condemning the employer’s actions.

“If a company can order its workers to crawl on the streets, then by analogy, the Chinese Communist Party’s evil must be unimaginable.”

Despite Chinese employment law forbidding employers from inflicting corporal punishment or humiliating its workers, this is not an isolated case of employee abuse in mainland China.

In September 2017, several male employees of a barber shop were recorded crawling across the streets in the city of Hangzhou in China’s eastern Zhejiang province. They were cheered on by onlookers. According to local media at the time, a suspected member of the staff later responded to the debate, saying: “We are challenging whether or not we can break through the concept of face. This was neither a prank, nor a performance.”

In 2013, hundreds of people watched on as uniformed employees of a cosmetics company moved on all fours across the commercial center in the city of Chongqing. The public security bureau for Yuzhong District posted on its Weibo page that the spectacle was a company stress-challenge course for workers.

Other punishments suffered by Chinese workers at the hands of their bosses have included orders to slap themselves, eat raw chilies, endure whippings with belts, drink urine, and eat insects, according to the Daily Mail.

One netizen summarized: “When there is no limit to power: if kindergarten teachers think they can get away with hurting children, there will be news of child abuse; if workers are afraid to lose their jobs, they must crawl the way their boss orders them to.

“What is there that cannot happen?

“Even a government must have its power kept in check, otherwise the world would be in chaos.”

These events are reminiscent of the “struggle sessions” held during the Chinese Cultural Revolution, a ten year period of chaos launched by chairman Mao Zedong in 1966 to enforce communist precepts, persecute traditional culture, and remove dissenting voices from society.

Victims of struggle sessions would be forced to confess to various political crimes—such as being an intellectual or part of the bourgeois class— in public, surrounded by crowds of people who would humiliate and brutally abuse the accused until they admitted to their charge, or until their death.

In one instance among millions, a disgraced official had his hair publicly shaved off by a 14-year old girl.

These witch hunts were fueled by mad revolutionary fervour, personal grudges, or at times, little more than whim, all in the name of eliminating counterrevolutionary, reactionary thinking.

Political enemies aside, ordinary people such as teachers were assaulted by students, youths were encouraged to attack other citizens, friends and family turned on one other, and those with privileged pedigrees, such as former landowners, were condemned.