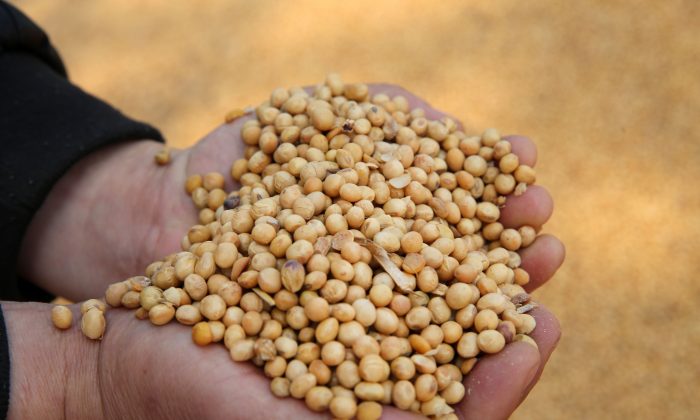 A worker displays soybeans imported from Ukraine at the port in Nantong, in China's eastern Jiangsu Province on May 10, 2019. (STR/AFP/Getty Images)
US-China Relations

Trump said at the time he would not impose new tariffs, and U.S. officials said China agreed to make agricultural purchases. But Trump said on July 11 that China was not living up to its promises to buy U.S. farm goods.

Chinese businesses have made inquiries with U.S. exporters to buy crops and agricultural products and applied for the lifting of tariffs, Xinhua said, citing Chinese authorities.

Meanwhile, the Chinese regime is considering a plan to boost purchases of U.S. soybeans, Bloomberg reported on July 22, citing unnamed persons familiar with the situation.

The plan could include waiving Chinese retaliatory tariffs on U.S. soybeans, the report added.

Trump said on July 19 U.S. Treasury Secretary Steve Mnuchin had a “very good talk” with his Chinese counterpart the day before. He added that the China’s economy “was not doing well,” referring to recent GDP growth figures showing second quarter growth at the weakest pace in the last 27 years.

“We’re dealing with China. … They’re not doing very well. They had the worst year they’ve had in 27 years. We’re having the best year we ever had,” he told reporters on July 19. “Let’s see what happens.”

China has confirmed that Vice Premier Liu He and Commerce Minister Zhong Shan spoke by phone on July 18 with Mnuchin and Trade Representative Robert Lighthizer regarding “further consultations, as well as the implementation of presidential consensus reached in Osaka.”

Taoran Notes, a social media account run by Chinese state-run newspaper Economic Daily, in a commentary on July 21, suggested the negotiations could resume towards the end of the month, before the August summer holiday period.

The two countries are locked in a trade dispute, triggered last year after the United States imposed punitive tariffs on China over its longstanding unfair trade practices, including theft of U.S. intellectual property, forced technology transfer, and currency manipulation.

Talks stalled in early May after the U.S. administration accused the Chinese regime on backtracking on agreed-upon provisions relating to law reforms in such areas.

Resolving such structural issues has been a sticking point for the United States, with U.S. officials saying that tackling the remaining differences between the two sides will be a difficult exercise.