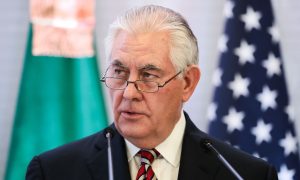 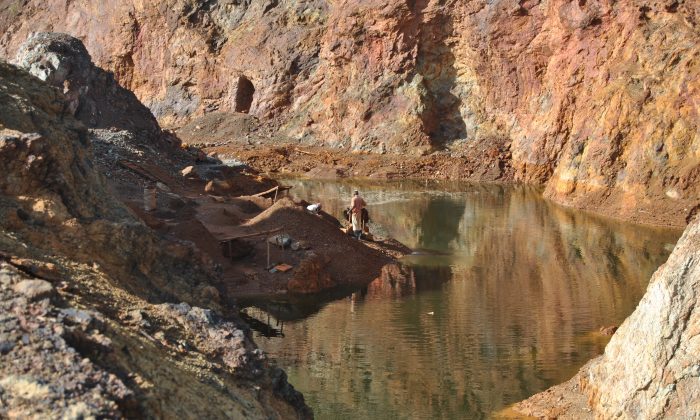 A view of the Macalder Mine in Kenya where the Omondis work at the moment, sieving sand in search of gold, on May 7, 2019. (Dominic Kirui for The Epoch Times)
Africa

NYATIKE, Kenya—An early-morning chill sweeps through the villages of Nyatike constituency in southwest Kenya near the border with Tanzania. Penina Omondi is busy sieving sand as she and her husband, Daniel Omondi, search for gold particles.

For the 46-year-old and her husband, this is their new way to make a living, after having had to move several miles away from home, where they used to mine sand. A Chinese company had come to their remote village with heavy equipment and started mining the same sand, creating an unhealthy competition.

Now, they have to rent a small house away from home near the Macalder mines where they currently work, sieving sand grains in search of the precious metal.

But their problems aren’t over.

“We have been doing this for the past few months, after leaving home in search of a source of income together with my husband, so that we could secure a future for our children by paying for their school fees and other needs until recently, when another Chinese company came here and started digging up the gold mines again,” Penina Omondi told The Epoch Times.

“Even though it is a good thing for us at the moment, since we don’t have to do the heavy digging [to mine sand], we don’t know what the future holds, because the company is fast depleting the mines here,” she added.

Before leaving their home village, the Omondis used to mine sand on the banks of a nearby river, selling it to make a living.

“We could mine sand the whole day and anyone who wanted to construct a house in the nearby villages would come to buy from us. Sometimes, because it was near our homestead, our children would come to assist us over the weekends or during school holidays, and also after school, in the evenings,” said Penina Omondi, a mother of seven. “Right now, they just have to wait at home for us to bring them food, when we visit once in a while. Our second-born daughter is taking care of her siblings now.”

In 2018, irate residents in nearby Osiri set fire to an excavator belonging to a Chinese company. The remains of the heavy machine still sit along the roadside on the approach to the Nyatike shopping center.

The protests held in 2018 by the residents prompted Nyatike member of Parliament Tom Odege to file a petition at the high court in Migori, challenging the legality of a Chinese company that was mining gold in the area, while also degrading the environment.

The verdict was handed down in January, with the court ordering the Chinese company, Lijin Mining Co. Ltd., to stop the mining of gold in the area. But even after the verdict, other mining companies are still venturing into the area.

Article 124 of the Mining Act of 2016 in Kenya stipulates that “a person shall not be granted or be entitled to hold or acquire an artisanal mining permit, a prospecting permit or a mining permit under this Part unless that person is (a) a citizen of Kenya; (b) or a body corporate, where no less than sixty percent of the shareholding is held by citizens of Kenya.”

Regardless, some Chinese companies in Nyatike still appear to be able to operate, in violation of the law. In the gold-mining court petition, the area member of Parliament accused some local leaders of allowing the operations to continue, after allegedly getting kickbacks from the companies.

His sentiments were echoed by Daniel Omondi, who said some leaders only are interested in what they are getting from these companies and not what the residents get.

“We have protested and done everything in our power, but once the companies bribe the leaders, they are allowed to mine here and displace us,” Daniel Omondi alleged.

It isn’t just Kenya that is struggling with the invasion of Chinese companies into the artisanal and small-scale mining sector in Africa. In 2013, during the Ghanaian gold rush, 124 Chinese nationals were detained by Ghanaian authorities for illegal mining.

In Kenya’s Kakelo Kakoth village, where the Omondis are from, mining of sand is taking place on the banks of River Kuja.

Abdul Barnabas, the site manager for Kylyn Works Ltd., the Chinese-owned mining company in the area, said that when the company moved in, locals were seen carrying sand in buckets within the area.

“But what we are offering the locals is a road network that we will build, to enable us to carry the sand and deliver it to our customers,” Barnabas said. “We have also promised to have them open an account, where we will deposit 500 Kenyan shillings ($5) per truck filled with sand and sold for the community living along the river to later share,” he said, adding that the company mines more than 30 truckloads of sand on a good day.

A few weeks ago, residents there also protested the presence of companies using dredging equipment to mine the sand from the river, depriving them of the natural resource that they say has been their source of income for decades.

Philip Modish, a motorcycle taxi driver in the area, said that the promises by the company are fake, and that they are just using the claims to win the hearts of the locals, before leaving them to wallow in poverty after depleting their resources.

“How I wish this government would just wake up and stand up for its people who have been sold out into poverty by a few individuals who just want to gain for themselves,” he said.