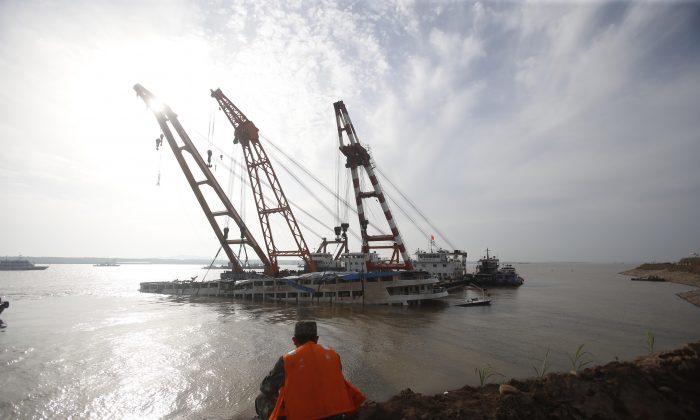 Rescuers work to raise the capsized ship Dongfangzhixing in the Yangtze River in Jingzhou, China, on June 5, 2015. (ChinaFotoPress/ChinaFotoPress via Getty Images)
Business

We often hear about wasteful spending and investment in China. We also hear this is not going to end well.

Now the Australian investment bank Macquarie is showing us what this looks like in practice. The analysts looked at the bonds issued by 780 companies and $3.47 trillion in debt (a fairly comprehensive sample size) and how these companies are managing interest payments.

The answers to these questions aren’t too pretty.

Like any private person (and very much unlike governments) private corporations have to use their income to pay for interest expense on borrowing.

Eventually, they will also have to use their income to pay back the debt. If they are able to cover their interest and pay back the debt without creating losses, the investment for which the debt was used can be considered successful.

Macquarie said that more than 20 percent of the companies it analyzed cannot cover their interest expenses with just their income from normal operations (earnings before interest and taxes or EBIT) or in finance terms are “EBIT uncovered.”

This means their total interest expense for one year is higher than one year’s operating profit. In other words, they have to borrow more money or raise equity to pay the bills. Or default.  Most of them are in the mining, materials, and infrastructure business.

“More than half of the cumulative debt in this sector was EBIT uncovered in 2014, and all sub-sectors have their share in the uncovered part, particularly for base metals, coal, and steel.”

The trend is getting worse: The percentage of companies unable to cover their interest expenses went up from 19.9 percent in 2013 to 23.6 percent in 2014.

Going even further back to 2007, there was only $160 billion in debt and all companies could easily cover their interest expenses with operating incomes.

Because of the critical debt situation, the regime blew up a stock market bubble to facilitate companies’ access to equity—an experiment, which backfired as the authorities banned IPOs while the market was crashing.

Furthermore, the bond market is usually more competitive than bank loans in China, where lending decisions are often based on political rather than economic factors. The total level of corporate debt including bank loans and bonds, as well as shadow financing is about 125 percent of GDP or $12.5 trillion, according to McKinsey.

Who knows how many companies have the income to pay the interest on trillions of banks debt as well.