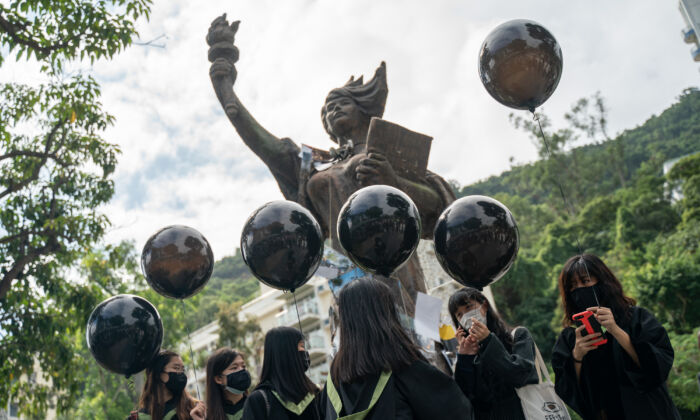 Students wearing black graduation gowns and masks stand in front of the Goddess of Democracy statue at the Chinese University of Hong Kong campus as they hold up black balloons in Hong Kong, China, on Nov. 19, 2020. (Anthony Kwan/Getty Images)
Viewpoints

VOA’s evidence: pro-Beijing candidates and their local allies took 89 of the council’s 90 seats.

I prefer the word “took,” for in this faux election “won” is a propaganda deceit.

Translation: the CCP installed cronies and operatives in the Legco. They are puppets and propagandists for the CCP dictatorship, not democratically elected representatives of Hong Kong’s now dispossessed citizens. Beijing also required all candidates, even the 20 in so-called elected slots, to pledge loyalty to China and the CCP.

Hong Kong’s status was ostensibly protected by the Sino-British Declaration of 1984 that, on paper, assured autonomy through 2047. Hong Kong’s post-handover constitution, The Basic Law (which had Beijing’s imprimatur) promised “one country, two systems,” adding “the socialist system and policies will not be practiced in Hong Kong.”

Beijing communists, however, do not respect negotiated diplomatic compacts. The regime decided to absorb Hong Kong, so to hell with signed and solemn treaties that manage relations among peace-seeking nations.

History’s bottom line: breaking the treaty means the CCP regime lied to the world. Since dictatorial control has largely shifted from collective decision-making to individual whim in the person of President Xi Jinping, that suggests Xi himself was complicit in the lie.

My guess is that Hong Kong’s 2019 demands for liberal freedoms and evident distrust of Beijing had international narrative resonance. Xi and his propagandists contend that authoritarian governance works and portray China’s dictatorship as a successful and stable ideological competitor to what they call the U.S.-led “liberal international order.” Hong Kong’s demonstrations challenged that Big Lie.

Beijing has broken other treaties. In 2016, The Hague’s Court of Arbitration gave the Philippines a unanimous legal victory over China. The Philippines case involved South China Sea territorial disputes and Chinese maritime resource theft. The court used the United Nations Convention on the Law of the Sea (UNCLOS) as its legal guide.

China signed that treaty—and continues to ignore the ruling. Chinese territorial expansionism, sometimes referred to as “adventurism,” continues in the South China Sea.

After Hong Kong, Taiwan is definitely a target.

Beijing’s abrogation of the Sino-British Declaration indicates it cannot be trusted or believed. It must be thwarted and resisted.

China’s economy is huge and its economic power immense. However, its economic operations are often opaque. Accounting practices are vague. Banks and corporations are creatures of the CCP. No one really knows how much debt saddles many Chinese companies. Japanese analysts see many signs the Chinese economy faces serious problems.

For these and many other reasons, free-world economies should “decouple” investments and technology sharing with China.

Relying on China for critical raw materials, such as rare earths, is a huge mistake that must end.

Relying on Beijing-made digital technology is another huge mistake.

Huawei and its suspect “next generation” wireless communication 5G technology has received deserved attention. Huawei systems have the ability to connect cellphones, the internet, the internet of things—virtually all things digital. Huawei could monitor communications (i.e., spy locally as well as globally), interrupt, deny or corrupt digital services. Evidence exists that Huawei is basically an arm of the CCP.

Recently Defense One reported on issues raised by a Virginia-based security firm that have attracted congressional attention. The firm found flaws in another Chinese manufacturer’s phones “that an adversary could use to steal data” and record calls and track user digital activity. The Chinese corporation’s “service agreement requires users to accept China’s laws” as required (paraphrasing Defense One) by China’s “national interest.”

Given Hong Kong’s demise, the service agreement should be cause for concern.