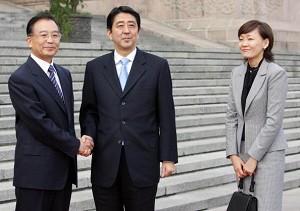 TOKYO—Akie Abe, the first lady of Japan was invited to visit China when Sino-Japan relations were at a high point of a low tide. The event was reported five months later by the media. The media pointed out that Shinzo Abe's successful visit to China two weeks after being appointed prime minister of Japan was a result of his wife Akie Abe's “emissary trip” to Beijing, which provided a “cushion.” Other Japanese media revealed that all of the arrangements actually fit in exactly with the CCP's “Abe Plan” which had been deployed for a long time. According to the report, Akie Abe was specifically targeted.

According to Hong Kong's Wenweipao newspaper, when Shinzo Abe was considered a likely candidate, Akie Abe was invited to visit Beijing under the guide of 43-year-old Beijing Opera actor Wu Rujun. A recent article in SAPIO , a Japanese magazine, reported that according to an informant in China's Ministry of Foreign Affairs, the Chinese embassy in Japan immediately forwarded the information to the Ministry of Foreign Affairs and repeatedly urged them to make meticulous arrangements for Akie. They made ample preparation. The report pointed out that Akie was deeply impressed by her three-day trip to Beijing.

This being her first trip to Beijing, Akie stayed in a luxury suite in the honored guest building of the Beijing Hotel. It was reported that the first stop of the visit was the Palace of Harmony and Peace, followed by the Beijing Friendship Store for ordering Chinese silk cheongsam. She dined at the Quanjude Restaurant, which is famous for its roast duck, and later the Laoshe teahouse for tea.

On the second day, she went to the Great Wall and the Ming Tombs in the morning, and later went to the Summer Palace. She also got to see the imperial relics from different dynasties. The Chinese International Culture Center staff welcomed Mrs. Abe on Empress Cixi's (Qing Dynasty) boat. Musicians played stringed and woodwind instruments on the boat, calligraphers and painters painted traditional calligraphy, all of which deeply impressed Mrs Abe who likes music and painting.

Although the trip took place near the end of May 2006, it was not widely reported until five months later. At that time, the CCP media was busy condemning Prime Minister Junichiro for visiting the Yasukuni Shrine, yet the CCP was expressing friendship with Shinzo. A reader on the Internet pointed out that after Akie Abe's secret visit to China in May was exposed on the Internet, CCP spies tried to repeatedly to cover it up. The CCP reacted so restlessly in clearing out the information that it made people think there was something wrong with it.

SAPIO revealed that the CCP had prepared the “Abe Plan” a while back. One diplomat indicated that Wang Yi, China's ambassador to Japan since 2004, reported to China's Ministry of Foreign Affairs that Shinzo Abe is the most likely candidate for prime minister after Junichiro. Wang Yi managed to get to know the Abe family through many channels and finally used Akie Abe who has a very open mind and broad interests, as the target.

The report indicated that Wang Yi frequently stated that art can bring together people with different backgrounds, even people who dislike each other. When Wang Yi found out Akie is a fan of Wu Rujun, he planned to have the Abes watch Wu's show. Soon the Abes and Wu became friends.

On April 30, when the Abe and the Wu families met for dinner, Wu said to Akie: “You should visit China and let Chinese people know of Shinzo Abe's future policy toward China and that Shinzo wants to be the founder of Sino-Japan alliances.” Akie thus agreed to visit China.

What is ironic is that all the tools used to impress Akie are related to ancient Chinese culture and arts which the CCP has always denounced and criticized.

Chinese Culture Used by the CCP

In the 1970s a book, disclosing some of the CCP's secrets, called “Liberate Japan” revealed the CCP's plan to export communism to Japan: Step I is to establish a relationship between China and Japan; Step II is to win Japanese people's support by utilizing their interests in Chinese culture. The CCP uses Chinese culture to cover up its real purpose and have the Japanese people give up their vigilance.

According to someone who knows Wu well, Wu's success in Japan reflects Japanese people's love of Peking Opera, an example of Chinese culture. Wu's invitation of Akie, however, reflects the CCP's political ambition to export its influence to Japan covered up by Chinese traditional culture.

An observer pointed out that although the strategy in “liberate Japan” was written over 30 years ago and the CCP has been changing its ways, its goal remains the same.