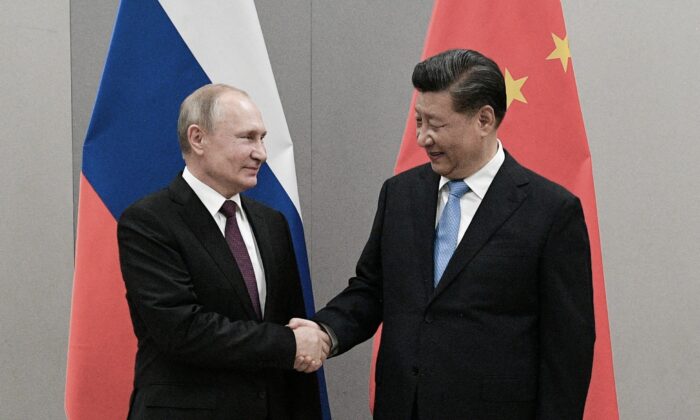 Russian President Vladimir Putin shakes hands with Chinese leader Xi Jinping during their meeting on the sidelines of a BRICS summit, in Brasilia, Brazil, on Nov. 13, 2019. (Ramil Sitdikov/Sputnik/Kremlin via Reuters)
Chinese Regime

The Chinese Communist Party (CCP) hopes to capitalize on Russia’s current isolation by rendering it more dependent on Beijing, according to one expert.

To achieve that goal, however, Beijing will need to provide Russia with assistance that flies under the radar of Western nations, which has leveled a slew of sanctions on Moscow over its invasion of Ukraine.

“It’s not that China isn’t willing to help Russia,” said David Goldman, deputy editor of the Asia Times during a recent interview with “China in Focus,” a program of The Epoch Times’ affiliate NTD. “China doesn’t want to help Russia in a way that attracts the anger of the West at this point and makes its own situation more difficult.”

“China will take no overt measures to help Russia evade the sanctions regime, but in many quiet and undetectable ways. China will help Russia sell oil, sell its exports, and so forth,” he added.

Goldman’s comments touch upon the growing question of just how far the CCP might be willing to go to provide Russia with relief from Western sanctions in the wake of Russian President Vladamir Putin’s war on Ukraine.

CCP leader Xi Jinping welcomed Putin to the Beijing Olympics in early February, where the two announced a partnership between their respective nations that would know “no limits.”

As it turns out, “no limits” may be too strong a phrase, however, and initial signs of strain between the two appear to be beginning to show. Notable among them: China’s reticence to provide any overt support to Russia.

Western nations led the most comprehensive coordinated sanctions in history against Russia over the last week, in an effort to punish the regime for its war of aggression in eastern Europe. How far China will go to ease the effects of those sanctions on its partner is an open question.

Analysts note that China is unlikely to be comfortable drawing international attention for its partnership given that Russia is now facing an international investigation following allegations that it is committing war crimes and crimes against humanity in Ukraine, including the bombing of schools and hospitals.

Nevertheless, the CCP refuses to label Russia’s invasion of Ukraine as an “invasion,” and within mainland China is actively censoring coverage of the war that is critical of the conflict and Putin.

Though the CCP is not currently giving overt support to Russia, it is providing a level of cover by refusing to participate in Western sanctions. Retired Air Force Brigadier General Robert Spalding noted the Russian war effort was dependent on the continued “tacit approval” of the CCP.

Indeed, just last month, the CCP signed an energy deal with Russia to build a new pipeline that will deliver 1.8 trillion cubic feet of natural gas to China from Russia every year.

At the onset of the war, the CCP lifted wheat import sanctions on Russia, providing Moscow with increased cashflow and Beijing with a vital product amid its ongoing food shortages.

Since then, the CCP’s financial regulator announced that it would not join in any of the West’s financial sanctions on Russia, claiming them to be without legal merit.

“We will not join such sanctions,” said Guo Shuqing, Chairman of the China Banking and Insurance Regulatory Commission on March 2. “We will keep normal economic, trade, and financial exchanges with all the relevant parties.”

Goldman said that the deepening China-Russia partnership would be a “formidable” strategic threat to the West. Despite what Russia may think, however, the CCP has every intention of dominating that partnership, and it is using Western sanctions to do so.

“If you read the Beijing media, their belief is that the consequence will be that Putin turns towards the east and that Russia will become overwhelmed or dependent on trade with China,” Goldman said. “China will be the main buyer of oil and raw materials, and the main provider of high-tech products.”

“The Western sanctions cut Russia off from many high technology products, including computer chips, which are the building blocks of a modern economy. China certainly can be an alternative source from him.”

As part of this effort, Goldman warned that the CCP could attempt to subvert the Western ban on Russia’s participation in SWIFT, the global messaging system that enables bank transactions.

To achieve this, he said, the CCP could use its own systems as a replacement to SWIFT that was based on local currencies rather than the dollar.

“In theory, the Chinese international payment system could be used as an alternative to SWIFT and, in fact, international trade finance transactions could be financed in [renminbi] instead of dollars, presuming that Chinese banks are willing to do that financing,” Goldman said.

“This is not a technical issue … It’s a political issue. China is very reluctant to appear as the helper of Russia when the entire West is determined to punish Russia. China is clearly afraid that sanctions might be applied to Chinese banks were they to step in and help Russia to evade the Western sanctions.”

Juliet Song of NTD contributed to this report.