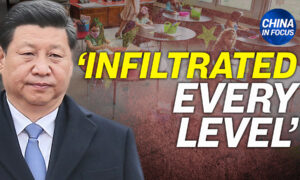 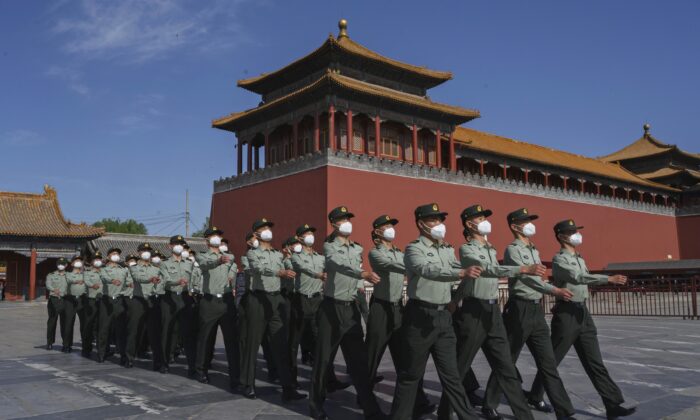 The paramilitary police officers march outside the Forbidden City, near Tiananmen Square in Beijing, on May 20, 2020. (Kevin Frayer/Getty Images)
Viewpoints

An agitprop article in China’s state-run media continues the relentless ChiCom (Chinese Communist) theme that America is in decline.

The Global Times published an article titled, “US is no longer exceptional, but it takes time to accept this fact,” and was written by the longtime China apologist Martin Jacques. He wrote, “9/11, and the 20 years since, are a textbook example of the chronic failure of American governance” in a supposedly unipolar world. This assessment turns the concept of “American exceptionalism” on its head by twisting its meaning beyond recognition.

“American exceptionalism” has long been misconstrued—and lied about—by ideological adversaries of the United States who redefine the phrase as braggadocio about America’s accomplishments since the country’s founding. That is not the correct definition! The phrase is distinctly ideological in its origins, with its underlying philosophy centered on freedom and liberty. America was the first country in the history of the world in which a government was organized with a constitution that laid out rules that constrained that government, while asserting that the individual was supreme and dominant in American society.

The U.S. Constitution and the individual and economic liberties that it guaranteed were what led to the development of the greatest country the world has ever seen because it unleashed people to be the best they can be. The United States is the only multi-ethnic and multi-racial constitutional republic in existence, with citizens of nearly every race, color, religion, and creed known to man. The downtrodden around the world have recognized America as the beacon of hope and freedom for over 200 years, and despite current domestic political disputes, people are still immigrating to the United States by the tens of thousands.

Martin Jacques’s article is of a piece with the continuing ChiCom propaganda about the decline of America and the emerging multipolar world under the supposedly benevolent leadership and altruism of the Chinese Communist Party (CCP). This latest screed is a self-licking ice cream cone, as he authored a book titled, “When China Rules the World: The End of the Western World and the Birth of a New Global Order.” Jacques would substitute individual freedoms and economic liberties for CCP totalitarianism and all that entails. The millions of Chinese killed during Mao Zedong’s Cultural Revolution (1966–1976) could not be reached for their opinions. How many might Jacques be willing to sacrifice to facilitate Beijing’s rise to world dominance? And where are all the millions clamoring to immigrate to communist China, the presumed new world leader? Nowhere to be seen.

Jacques did not immediately respond to a request for comment.

The United States is exceptional because its constitution guarantees individual freedom and liberty and constrains the central government. By comparison, here are some elements of CCP exceptionalism:

• Murdering civilians by the millions
• Ongoing genocide in Tibet and Xinjiang
• Religious persecution and suppression
• Exportation and exploitation of the CCP virus, commonly known as the novel coronavirus
• Continued fentanyl and opioid production
• Wolf warrior diplomacy
• The state matters; individuals do not (and are merely statistics)

Much has and will be written about America’s Afghanistan debacle. Was it good intentions gone bad, or military-industrial complex corruption writ large, or symptomatic of the cultural rot in the American political class, or the shifting sands of redefined missions and exit criteria, or a simple loss of the political willpower to do what it took to succeed, or a combination of factors? One thing for certain: The full military might and power of the United States was never brought to bear to achieve total victory on the battlefield. The biggest lesson since World War II remains unlearned by the political class: The commitment of American blood and treasure must be accompanied by the political will to set clearly understood mission success criteria at the outset of hostilities, and to use whatever force of arms is necessary to achieve victory in the shortest amount of time with the least American and allied casualties. This did not happen in Afghanistan, as there was no real effort to destroy the Taliban, including their sanctuaries in Pakistan. The political class did not have the will to do what was necessary to achieve total victory.

The defeat in Afghanistan can be laid at the feet of the American political class who prolonged the war through a series of mission changes, a lack of accompanying mission success and exit criteria for U.S. forces on the ground, inadequate forces deployed to accomplish those missions, and frequent force rotations that disrupted continuity of operations with Afghan allies on the ground. But the defeat had nothing to do with a presumed degradation of American exceptionalism, as Jacques claims, as America’s constitutionally guaranteed individual freedoms and liberties remain in place despite the efforts of Jacques and other ChiCom apologists to spread defeatism everywhere.

To summarize, yes, the United States has always been and remains exceptional according to the original definition. The Global Times article purposely misconstrues American exceptionalism in order to sow defeatism in support of CCP psychological and geopolitical objectives. The U.S. Constitution is unique in the history of mankind, and its guarantees are beacons of light to the rest of the world. What do the ChiComs have to offer by way of comparison?

Despite the ongoing domestic political battles in the United States—exacerbated by pro-communist people who infest America’s cultural institutions—there is still a large slice of Americans who adhere to the Founders’ principles of individual freedom and liberty, as well as long-held American traditions such as assimilation, instead of the cultural Marxism of “diversity, inclusion, and equity.”

What we Americans are currently struggling with is how to hold the unexceptional slice of grifters, knaves, and thieves in the United States accountable for their various crimes while teaching the principles of American exceptionalism, traditions, and culture to our children. The “unexceptional” would be the kind of Americans who have succumbed to the ChiComs’ siren song (and yuan bribes) over the years and who are emulating CCP authoritarianism and methods in governing America and the individual states through lockdowns, mandates, and other arbitrary measures. Their boldness in 2021 makes them easy to identify.