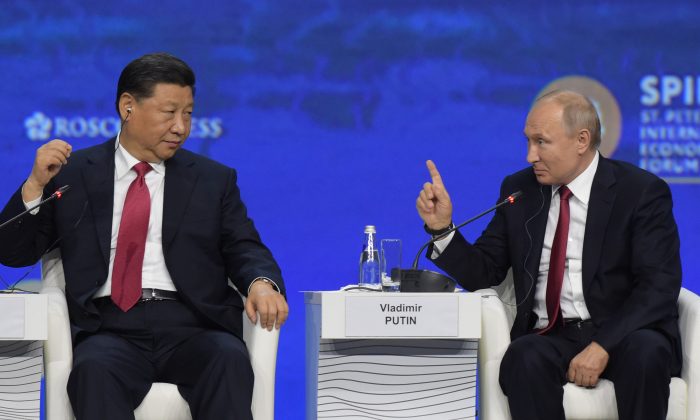 The Chinese Communist Party (CCP) is sending mixed signals about its commitment to uphold international sanctions against Russia, following the latter’s invasion of Ukraine. The CCP regime has enacted some sanctions and lifted others.

Two of China’s largest state-owned banks restricted financing for purchases of Russian commodities on Feb. 25, following an announcement of a number of sanctions by the United States and its allies in response to the ongoing war in Ukraine.

The CCP appears to be taking measures to ease that hardship on Russia, however, and it is unclear how the CCP will respond to recent developments including the United States and allied sanctions on Russian President Vladimir Putin himself.

Notably, the Industrial and Commercial Bank of China and the Bank of China both restricted financing of dollar-denominated purchases from Russia. Chinese importers of crude oil, of which Chine is the world’s largest purchaser, were paused as buyers await clarification of financing under the new situation.

It appears that the CCP will continue its tightrope walk of strengthening ties with Russia while simultaneously falling short of drawing Western sanctions onto itself.

To this end, the CCP announced that it was lifting all wheat-import restrictions on Russia. The move could undermine Western sanctions, providing the CCP with much-needed food relief and Russia with much-needed cash flow. Russia is the world’s largest producer of wheat and Ukraine is the fifth.

Similarly, despite pleas from U.S. President Joe Biden to help ease rising gas prices, the CCP boosted its oil reserves and refused to release them to global markets.

India, Japan, South Korea, and the UK worked to release some of their reserves to market to temper prices unseen since the annexation of Crimea by Russia in 2014.

The CCP’s mixed signals on sanctions come amid criticism that the Party is attempting to benefit from occupying a middle position between Moscow and Washington in the ongoing crisis.

Though CCP leadership has maintained that they are neutral in the issue of Ukraine, they have refused to condemn Russia’s justifications for the war and have used the crisis as an opportunity to belittle the United States and NATO on the world stage, continuously blaming both for stoking Russian aggression against Ukraine.

China’s Foreign Minister Wang Yi said Friday that Ukraine was entitled to its sovereignty but that the United States and NATO had driven Russia to fear for its security.

China’s foreign ministry spokesperson, Hua Chunying, on Thursday used the crisis to recall a 1999 incident in which a NATO bombing run in Yugoslavia resulted in the deaths of three Chinese journalists.

Meanwhile, employees at a state-run media outlet were told not to publish any content that appeared critical of Russia’s invasion of Ukraine, according to an accidentally published internal memo from Horizon News, betraying a pro-Russian bias in the regime’s foreign policy.

“Whoever publishes them will be held responsible,” the memo stated.

White House spokesperson Jen Psaki downplayed the CCP’s ability to reduce the effect of sanctions during a press conference, saying that the CCP could not match all of the economic weight carried by the sanctions.

“In terms of what impact they can have, I mean, China only accounts for about 15 percent … of the global economy,” Psaki said on Feb. 24.

“If you look at G7 partners, in the U.S. and Europe, it’s about 50 percent, right? So, they cannot cover what the impact of the sanctions that have been announced in coordination with Europe would—how they would impact Russia.”

The statement underscored a more contentious issue, however, which is whether or not sanctions were an effective deterrent against Russia or, in a future conflict, against the CCP.

“There’s just no way the sanctions are going to work,” said Richard Hass, president of the Council on Foreign Relations, during a discussion on Twitter.

That statement seemed to be reflected in a speech delivered by President Biden on Feb. 24 when, despite having touted sanctions as a deterrent against conflict in Ukraine, he admitted they would likely not end the conflict now that it was begun.

“No one expected the sanctions to prevent anything from happening,” Biden said.

“Let’s have a conversation in another month or so to see if they’re working.”

Meanwhile, China’s heavily-censored social media was inundated Friday with calls to stand with Putin and to forcibly annex Taiwan, reflecting the views of an increasingly nationalist popular culture among Chinese youth in the country.

A statement from the Kremlin on Feb. 25 said that Xi held a phone call with Putin and expressed support for Russia.

“Xi underscored his respect for the actions of the Russian leadership in the current crisis,” it said.