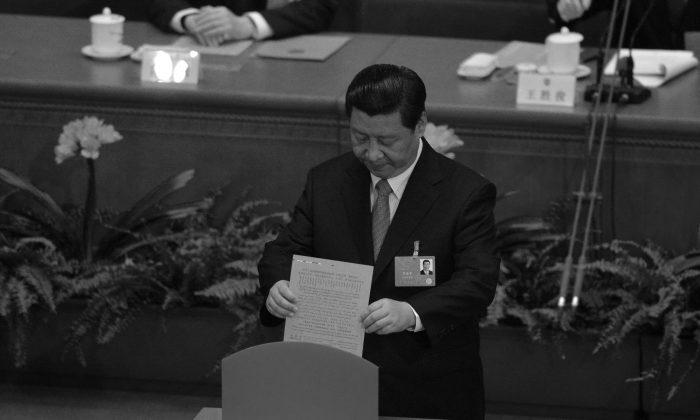 Communist party general secretary Xi Jinping votes during the election of new officials during the 12th National People's Congress in the Great Hall of the People in Beijing on March 16, 2013. A report by Asia Sentinel indicates that his doctoral thesis may have been plagiarized. (Mark Ralston/AFP/Getty Images)
China

Xi Jinping, the first Chinese leader to hold a doctorate degree, is now having his credentials called into question. Hong Kong author Joe Chung alleges that passages of Xi’s doctoral thesis, which was submitted to Tsinghua University in 2001, were plagiarized. Scholars have been speculating about the validity of Xi’s thesis for years, but Chung seems to provide documentation, according to a report by Asia Sentinel.

According to his official biography, Xi Jinping studied chemical engineering at Tsinghua University from 1975 to 1979. From 1998 to 2002 he studied Marxist theory and ideological education in a postgraduate program at the School of Humanities and Social Sciences of Tsinghua and graduated with a Doctor of Laws (LLD) degree. At the same time, he was serving the capacity of Deputy Secretary for CCP Provincial Committees in Fujian and Zhejiang Provinces.

The dissertation, titled “A Tentative Study on China’s Rural Marketization” and published by the People’s Publishing House, contains many similarities and in some cases word-for-word duplications of passages found in prior work. For instance, on the first page of the preface is a paragraph copied, without apparent attribution, from the Communist Party Central Committee Statement on Major Issues in Agriculture and Rural Work, published by the 15th Central Committee of Communist Party of China in October 1998.

Xi’s thesis bore are close resemblances to other works, such as “Operation and Development of China’s Economy,” a 1995 publication by the Chinese Academy of Social Sciences, Asia Sentinel showed.

Other allegations hold that Xi’s subordinate Liu Huiyu was tasked to write the dissertation. Asia Sentinel’s report points out many similarities and instances of direct copying between Xi’s thesis and Liu’s book, “Globalisation and China’s Agricultural Development,” which was written in 2001 before Xi’s dissertation and published the following year.

After the thesis was published, Liu’s career advanced rapidly. She now works as a professor and associate dean at Jiangxia University in Fujian Province. When contacted by Asia Sentinel for their report, she declined comment.