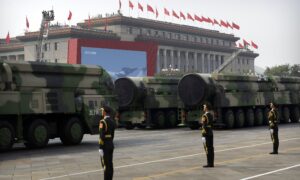 Author and China expert Gordon Chang says the Chinese communist regime, which hadn’t been truthful about the CCP virus during the early outbreaks, should be held accountable for its global spread and the positive diagnosis of President Donald Trump.

During an Oct. 5 interview with The Epoch Times, the longtime China watcher said he believes Beijing intentionally allowed the CCP (Chinese Communist Party) virus to spread beyond China’s border in order to damage other economies.

“I believe that Xi Jinping took steps to deliberately spread the coronavirus once he realized that it crippled his own country,” Chang told The Epoch Times’ Jan Jekielek. “I don’t know whether it was cooked in the lab or whether it was naturally occurring, although I suspect it came from a lab.”

Chang said that Chinese authorities, under Xi’s leadership, knew the threat of the outbreak as early as last December but intentionally concealed its severity to the rest of the world, which kept other countries’ guards down.

“I believe that China infected Trump,” said Chang. “Now, one can say that the American response has not been as quick as it should have been. And there’s going to be a lot of debate over that. But we do know that even once China admitted the contagiousness of the disease after denying it, that it tried to downplay the severity of the situation. And that led countries, including the United States, not to take precautions that they otherwise would have.”

Chang noted that top members of the White House’s pandemic task force, namely Drs. Deborah Birx and Anthony Fauci, have openly expressed skepticism about statistics from China, which largely shaped the outside world’s response to the threat.

In April, Birx said that China’s reported low death rate was “basically unrealistic,” while Fauci went even further, accusing the CCP leadership of “propagating misinformation right from the beginning.”

When asked about State Secretary Mike Pompeo’s recent speeches in which he separated the CCP and the Chinese people, Chang said such a diplomatic approach is what Beijing fears the most.

Chang also warned about an ongoing effort to destabilize U.S. society amid the presidential election. In addition to pro-Beijing political spam networks that “relentlessly attack the president,” Chang said the CCP is also behind the violence that has been seen in U.S. cities over the past months.

“There are these reports that China has been trying to foment violence in the United States this year,” he said. “There’s a Radio Free Asia report that says the intelligence unit of the People’s Liberation Army bases themselves in the now-closed Houston consulate. And there they use big data to identify Americans likely to participate in Black Lives Matter and Antifa protests. And then, the PLA sent them videos on how to riot.”

“If the Communist Party were competent in reading the moods of Americans, we’d really be in trouble,” Chang said.

With reporting from Jan Jekielek