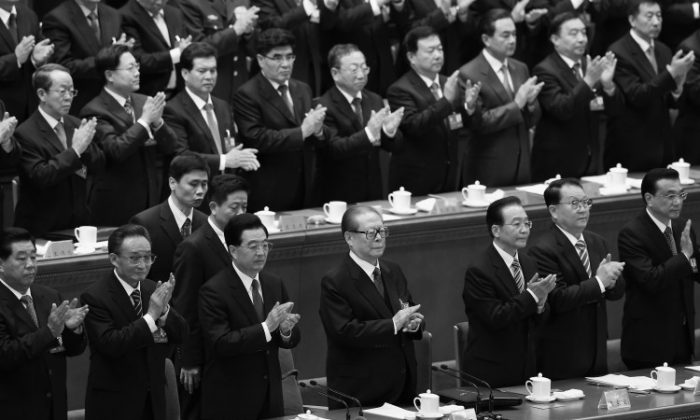 The presumptive next head of the Chinese Communist Party, Xi Jinping, attends the opening session of the 18th Party Congress on Nov. 8, in Beijing, China. Xi's new role is expected to be made official on Nov. 15. (Feng Li/Getty Images)
Opinion

The factions that dominate the Chinese Communist Party (CCP) continue to hold one another in a death grip, and a wary balance of power has taken shape behind the high red walls of the Party leadership compound, Zhongnanhai.

On Nov. 15, the first plenum of the CCP’s 18th Party Congress released the names of the new Politburo Standing Committee.

Xi Jinping, as expected, became the next Communist Party general secretary and, to the surprise of some, chairman of the Central Military Commission—the head of China’s armed forces, succeeding Hu Jintao in both posts. Li Keqiang became premier, succeeding Wen Jiabao.

The new membership of the Standing Committee is far from the wishes of the public, but the wishes of the public were not a consideration. As the result of this high-stakes game, military power rests in the hands of close subordinates of Hu Jintao and Xi Jinping, while the power of the Party and the government has taken on a distinct Jiang-faction coloration. The purported reformist forces have shrunk.

This arrangement provides a balance of power within the CCP, but the balance is doomed to be short-lived. The reasons for conflict remain in plain sight, and a greater storm is gathering.

The current situation has as much to do with the temperament of outgoing Party head Hu Jintao as the desperation of the members of the Jiang faction. A different kind of man than Hu Jintao would have seized the chance given him in February to settle his decade-long conflict with Jiang Zemin and put his stamp on China.

After former Chongqing police chief Wang Lijun fled to the U.S. Consulate in Chengdu on Feb. 6, Wang was brought back to Beijing. There he revealed the plan by Bo Xilai, Zhou Yongkang, and others to remove Xi Jinping from power sometime after the 18th Party Congress.

Hu Jintao and Wen Jiabao began working methodically, taking one measured step at a time to dismantle Jiang’s faction. Bo Xilai was removed from his posts, subjected to the abusive Party interrogation of “shuanggui,” threatened with trial, then expelled from the Party, and turned over to criminal court. Bo’s Chongqing cronies were purged.

Security czar Zhou Yongkang was marginalized, his people replaced in the Political and legal Affairs Committee (PLAC), and institutional changes were made to the PLAC to limit its power. Where Zhou Yongkang held a seat on the Standing Committee, his successor heading the PLAC would not.

Hu Jintao also shuffled generals around, making sure that his people were in key commands.

Hu’s power reached its peak right before the 18th Party Congress. He controlled the military, and even Jiang Zemin himself was under Hu’s authority.

But after assuring that he had the upper hand, rather than finally taking down Zhou Yongkang and Jiang Zemin and destroying the Jiang faction, Hu held back. He wanted to protect the Party, and the Party might not survive a fight to the finish with Jiang.

‘The Net Is Torn’

Jiang’s faction could not afford such cautions.

The watchword for the resistance of Jiang’s faction to Hu was unwittingly given by Wang Lijun when he walked out of the U.S. Consulate in Chengdu on Feb. 7. He said to the crowd that had gathered, “The fish dies and the net is torn,” a Chinese saying that paints an image of simultaneous destruction.

The Jiang faction fears extinction if it does not hold power. Only by remaining in control can this faction avoid being held accountable for its mass crimes against humanity.

This fear led to news reports appearing in Bloomberg and the New York Times claiming to document the wealth, respectively, of the families of Xi Jinping and Wen Jiabao. All of the CCP leadership rightly fears the exposure of the tremendous fortunes the top leaders have made.

Most of China is still very poor, and the Chinese people hate how the CCP elite have enriched themselves on the backs of the people.

Zhou Yongkang let it be known that the next step would be publishing similar information about the wealth of Hu Jintao, Li Keqiang, Li Yuanchao, and others. This would have amounted to pulling the building of the CCP down around all of their heads.

The blackmail worked. In order to preserve the Party, Hu Jintao felt he had no choice but to cut a deal. No PLAC members would get into the Politburo Standing Committee, but three individuals tied to Jiang—Zheng Dejiang, Liu Yuanshan, and Zhang Gaoli—would get on. They would take places originally meant for key members of Hu’s faction, including Wang Yang and Li Yuanchao, who are known as reformers.

At the same time, in order to give Xi Jinping and Li Keqiang more freedom, Hu decided to retire completely in order to break with the unwritten rule that retired Party veterans can interfere with the running of the country.

Jiang Zemin retired in 2004 and yet has meddled regularly in affairs, following a precedent set by Deng Xiaoping. Hu Jintao, who could have stayed on as head of the military for two more years, sought by quitting to deprive this precedent of any authority.

However, no matter how hard Hu Jintao tries to protect the CCP, at best he can only achieve a short-lived balance. The Chinese communist regime has long lived a precarious existence, but now more so than ever.

Continued on the next page: Illusions Dissolving