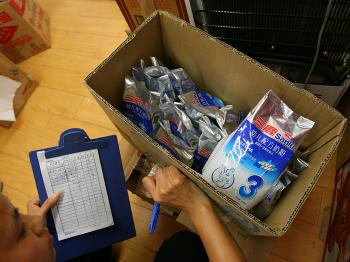 A worker marks a box of Sanlu brand milk powder which was withdrawn from the market shelves at the Jingkelong Supermarket on September 12, 2008 in Beijing, China. (China Photos/Getty Images)
China

Barry Mills
View profile
Follow
biggersmaller
Print
The Chinese Communist Party (CCP) has released misleading information about the safety of melamine, the poison responsible for contaminated milk and deaths of infants in China.

Investigations into CCP-run news Web sites by The Epoch Times have revealed statements claiming that milk containing melamine is safe to drink.

A report titled “Result of Special Examination on Melamine Content of National Liquid Milk Products” was published on People.com.cn, the Chinese language equivalent of People’s Daily Online. The report stated that the U.S. Food and Drug Administration (FDA) and the European Food Safety Authority (EFSA), along with the Chinese authorities, had conducted scientific evaluations on the safety margin for melamine.

“According to the strictest testing standards, it is safe for an adult with an average weight of 60 kg [132 pounds] to drink less than two liters of milk with the above amount of melamine per day. To date there are no diagnosed cases of stones in urinary system due to drinking these milk products,” said the report.

An Epoch Times reporter called the FDA for clarification. An FDA spokeswoman said they have never published information on the safety margin of melamine.

Information released by the FDA warns consumers not to purchase any infant formula milk powder from China.

In another report released by the Science Times in China, senior research professor of food safety Chen Junshi said there is no need to panic over food safety. Chen believes there are no health concerns for consumers drinking small amounts of milk with melamine in it, and that milk formulas with low levels of the poison are safe.

China health minister Chen Zhu was quoted on Xinhua.net on Sept. 17, stating that “melamine is a low toxic industrial chemical. Animal test results showed that its metabolism in animals is fast so it will not remain in the body. It only affects the urinary system and no evidence has been found to show that it can induce tumors in the human body.”

But not all of China’s experts agree. Dr. Gao Dawei, former dean of the Light Industry and Food College at the South China University of Technology, said the information released was very irresponsible.

“It will affect many organs once it is inside the human body. Especially if eaten in large quantities along with food. And it may also stay in organs other than the kidneys. It could affect the liver and the gallbladder too. Its harm to the human body is actually quite serious,” said Dr. Gao.

Chinese Internet users are angry that the CCP is hiring experts to deceive them.

One blogger said, “In China, the worst and most unscrupulous persons are these kinds of experts. They are the most deceptive; they cause the biggest harm to our people and to society.”

The addition of melamine into food is not approved by the FAO/WHO Codex Alimentarius (food standards commission), or by any national authorities.

There are no direct human studies on the effect of melamine on humans. But extrapolation from animal studies can give an indication of how people, especially infants, could be affected. When combined with another chemical called cyanuric acid, also present in melamine powder, the combination will form crystals, which can give rise to kidney stones.

In 2007, melamine was found in pet food manufactured in China and exported to the United States. Thousands of dogs and cats in the United States died of kidney failure after eating the contaminated feed.