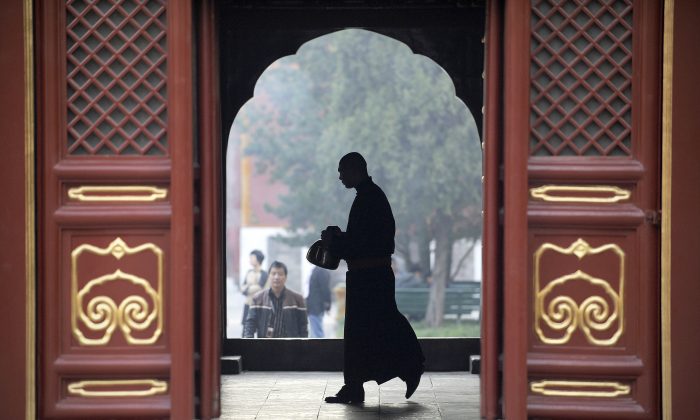 A monk at the Yonghegong Lama temple in Beijing in Beijing on October 24, 2012. Many Chinese officials, seeking advice for their careers, have built friendships with monks and qigong masters in recent years. (Wang Zhao/AFP/Getty Images)
China

Not content with the Communist Party’s Marxist atheism, many officials in the Chinese regime seek out the friendship and services of Buddhist monks and Daoist mystics to help them through their tumultuous careers. The officials are in it for advice, good fortune, and even clemency for misdeeds.

While monks and Daoist cultivators of antiquity may have kept away from the chaos of the secular world, their modern counterparts, branded by official Communist ideology as “superstitious,” have turned the position into a profitable line of work.

According to the Hong Kong-based Phoenix magazine, Yang Weize, the ousted municipal Communist Party secretary in eastern China’s city of Nanjing, maintained a close relationship with Buddhist abbot Shi Chuanzhen. Following Yang’s downfall at the hands of the regime’s disciplinary agency, Phoenix released a number of photos showing the party boss and Buddhist monk together.

Shi told the Southern Weekly, a Chinese newspaper, that officials would come to him for consultation about their troubled careers or lives, or seek advice for the auspicious scheduling of events such as weddings.

Other communist officials donated large sums of money to the temple, hoping to gain clemency for committing sinful deeds.

In Shi’s reception room at the Xuanzang Temple, photographs showing the abbot with local and central high-ranking Communist Party officials were hung up all over the walls, according to the Southern Weekly report. Yang Weize had also visited the temple.

Other officials who had made friends with Shi were also sacked, including former Nanjing Mayor Ji Jiangye and Feng Yajun, a member of a municipal committee.

Shi Chuanzhen is not just an abbot. He also serves as the deputy president of the regime-approved Nanjing Buddhist Association and is a member of the city’s Political Consultative Conference.

Some famous Chinese monks have become key networkers among high officials, according to overseas Chinese language online media Duowei on Feb. 18. Many officials seek those famous monks to make connections with other high officials, seeking opportunities of promotion and wealth, the report said.

Qigong master Wang Lin, known for his “magic power” of producing snakes from empty washbasins, has been active in business and entertainment circles, according to mainland Chinese media.

In the southeastern province of Jiangxi, Wang earned the nickname “underground minister” of the Communist Party’s Organization Department due to his popularity with the provincial officials, according to the Duowei report.

In 2006, Wang was consulted by Song Chenguang, the party chief of Yichun City to look over and approve his personnel adjustment plans. On Wang’s advice, at least one official was denied promotion on grounds that it would bring bad luck to Song’s career.