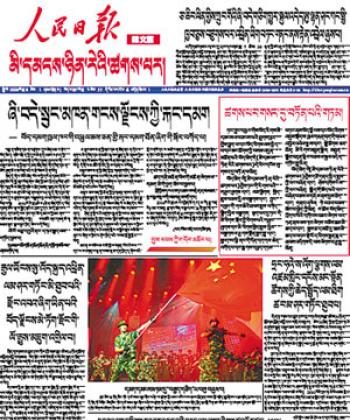 People's Liberation Army troops dance with Chinese flags on the front cover of the first edition of the People's Daily Tibetan Version. The first headline says: 'The army stationed in the snow safeguards the peace.' (People's Daily)
China

This month’s launch of the Tibetan Version of the People’s Daily has been marketed as both a uniting force for Tibetans and a true gateway to the rich Tibetan culture. China media experts, however, claim the Chinese regime is looking for new avenues to “brainwash” Tibetans with official propaganda.

The People’s Daily Tibetan Version—not to be confused with the Tibetan Daily, a mouthpiece of regional officials—takes its orders from the central government, and began publication on August 1. It is the Chinese Central Committee’s first venture into propaganda in an ethnic minority language, and its advances have been trumpeted enthusiastically by officials at the top echelons of the Chinese Communist Party (CCP).

A four-page spread translated into Tibetan from Chinese, the Daily prints a total of 50,000 copies, 20,000 of which will be circulated in Tibet alone, and the rest in surrounding provinces with concentrated Tibetan populations, reports the China Daily, another state-run media.

Meng, who is responsible for overseeing the translation, printing, and distribution of the paper, said that each village will be delivered three free copies of the paper, while temples and primary and secondary schools will receive two complementary copies.

The paper says its news coverage will “contribute to economic development, social progress, ethnic harmony and stability in Tibet.”

Some official explanations for the goal of the Tibetan Version appear contradictory, however.
On the day of the first issue Xinhua quoted an official statement from the People's Daily stating, “We will try our best to provide accurate and timely news that relates to local people.” The same article later said that the publication would consist of major guidelines of the Party and policies of the central government. Other official statements make clear that all content will be translations from the Beijing edition, apparently obviating the possibility of local news.

“They're not really serious with those words they talk about every day. Today they say it this way, tomorrow they change it. Anyway, it's propaganda … it's a vehicle for new, enforced brainwashing,” he said in a phone interview.

Nevertheless, the newspaper takes pains to stress the cultural and educational benefit it brings, including exposing Tibetans to the Tibetan language and traditions. The English version of the Web site carries a seeming treasure-trove of Tibetan cultural stories.

This angle is also disputed, however. An employee of the Office of Tibet in New York shared his view that the representations of Tibetan culture are only lip-service, saying, “Culture should be part of the people, culture should not be served as a museum piece.” He requested anonymity because he still has family in Tibet

Thubden Sangha, president of the Wisconsin Tibetan Association, gave a similar rejection: “The paper is not beneficial to Tibetans, culturally or educationally. It's what you call sinoizing the Tibet issue based on a communist agenda. It's like reading the Onion.”

Finding out the views of Tibetans on the ground is somewhat more difficult. Representatives from the Office of Tibet said speaking to foreigners about such issues could endanger their safety. Cheng Xiaonong also asserted that phone calls would most likely be monitored.

Scholars see the publication as part of a wider attempt by the Party to get its message to minority groups, alongside technical efforts to use Tibetan on computers. Guiding public opinion has been difficult for regime leaders in Tibet, as the riots of 2008 show, partly because not all Tibetans grew up reading Chinese.

David Bandurski, a Chinese media commentator and editor of the China Media Project, views the publication as another manifestation of what has been termed “Control 2.0,” codeword for Hu Jintao's media policy since mid 2008. This policy uses the standard control techniques, like bans on media coverage, with more crafty ways of pushing the Party's message out.

“The launch of a Tibetan language version of People's Daily is essentially part of this more concerted effort by President Hu Jintao to amplify the messages of the CCP and actively set the agenda, particularly on sensitive stories like the unrest in Xinjiang last month, and Tibet last year,” writes Bandurski in an email correspondence.

The requirement that the publication be close to local people is also another clear articulation of Hu's media strategy, he said.

“It may sound like this policy is about freer journalism, but it most certainly is not,” Bandurski writes. “It is about savvier and more salable content,” including in foreign languages.

Party officials are undeterred, however, and speak of such efforts openly.

One meeting between newspaper staff and Party bigwigs in Tibet, available in Chinese on the Internet, says the Daily should “continuously strengthen the common ideological foundation between the cadres and the people to help them unite as a whole,” and that “the Daily is of great significance in further enhancing the propaganda battlefront in Tibet, seizing the authoritative position in propaganda and public opinion, and taking a preemptive stance in public debates and opinion in Tibetan-related issues.”

It is also supposed to fully manifest the Central Committee of the CCP’s “special love and care for Tibet,” according to Cui Yuying, standing member of CCP Committee and minister of Propaganda of Tibetan Autonomous Region.

On August 11, 2009, Cui, with Lie Que, deputy secretary general of the CCP Committee of the Tibetan Autonomous Region, made a special effort to visit the publishing office of Tibetan Daily, according to an official report. They sent warm-hearted greetings to the translators, layout personnel and workers at printing shop.

Meng Xiaolin, the editor-in-chief, was buoyant, explaining that staff members would certainly implement the requests raised by Lie Que and Cui Yuying in all aspects of their daily operation. They would operate intimately with the People’s Daily, he said, “So as to make the People’s Daily Tibetan Version an outstanding Party Daily with rich Tibetan Characteristics.”