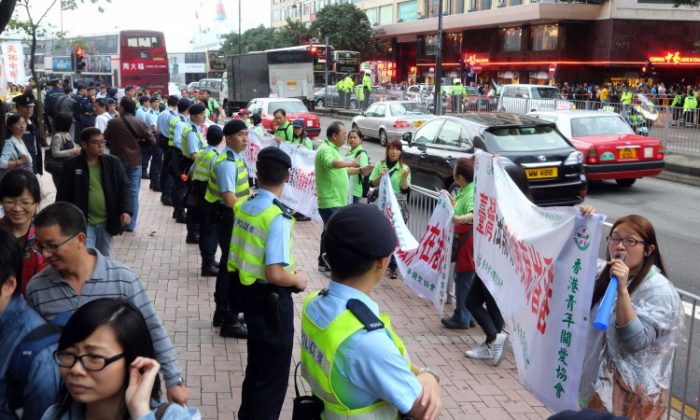 The Hong Kong Youth Care Association wrapped Falun Gong display boards in their own banners, with anti-Falun Gong slogans on them, at Lok Ma Chau in Hong Kong. (The Epoch Times)
China

HONG KONG—A group with ties to the Chinese regime that has several times interfered with events in Hong Kong over the past six months did so again Sunday, attempting to disrupt a parade and rally to commemorate the eight-year anniversary of the publication of the Nine Commentaries on the Communist Party. In speeches at the rally, local community leaders sharply condemned the interference.

The “Nine Commentaries” is an editorial series that gives an uncensored account of the nature and history of the Chinese Communist Party (CCP). Published by The Epoch Times in November 2004, it has caused great consternation for CCP officials.

Promptly issued as a book, the “Nine Commentaries” caused a sensation in Hong Kong, with The Epoch Times continuously republishing it until its printing house ran out of paper stock.

The “Nine Commentaries” very soon inspired the movement called “Tuidang” in Chinese in which individuals renounce, withdraw from, or quit the CCP and its affiliated organizations. The first renunciations were recorded in December 2004, and, as of today, the Global Service Center for Quitting the Chinese Communist Party has recorded 128,300,811 such renunciations.

The Nov. 25 parade and rally honoring this book and the movement it gave birth to was organized by practitioners of the Falun Gong spiritual practice, the Global Service Center, and several community groups.

Members of the Hong Kong Youth Care Association (HKYCA) did their best to spoil the party. Transported in on two buses and clad in green uniforms, they started gathering as early as 7:00 a.m. near the rally location on Cheung Sha Wan Road in Kowloon.

They first set up a stage of their own, holding banners with slogans slandering Falun Gong. Police restrained some of them who attempted to approach the Falun Gong rally area.

Later, members of the HKYCA attempted to disrupt the parade by going along the parade route displaying banners, sounding horns, and shouting. As the parade ended, the group was given meal boxes and taken away in their buses.

At the rally, speakers condemned the HKYCA interference and how the communist regime has hired local gangs to interfere with legal, peaceful activities.

Legislative Council member Leung Kwok-hung said he suspected that Hong Kong’s chief executive, Leung Chun-ying, has done much to serve the CCP since taking office and is a closet member of the Party. He also blamed Leung’s stance for the inaction displayed by Hong Kong police in dealing with the HKYCA.

The founder of Citizens’ Radio, Tsang Kin-shing, nicknamed “The Bull,” said since Leung Chun-ying has come to power, Hong Kong has become much more like China.

“Today they suppress Falun Gong,” Tsang said. “Tomorrow it will be the Democratic Party, and the day after tomorrow the Citizens’ Radio will be cracked down on by them.”

Also speaking at the rally and commenting on the activities of the HKYCA were: the editor-in-chief of The Epoch Times, Annette Jun Guo; Chairman of the Hong Kong Alliance in Support of Patriotic Democratic Movements in China Li Zhuoren; the executive director of the Global Service Center for Quitting the CCP, Li Dayong; and Hong Kong Citizens for Falun Gong Group representative Syong Li.

Over the past several months the HKYCA has attempted to disrupt booths in Hong Kong where Chinese can renounce the CCP.

It has also interfered several times with booths where Falun Gong practitioners give information to passersby about what Falun Gong is and how it is persecuted in China.

The organization has tried to obscure Falun Gong practitioners’ displays with banners attacking Falun Gong, and have also used loudspeakers blaring CCP propaganda, shouting, cursing, and the blowing of horns—among other methods—to cause problems. In one incident in July someone associated with the group pulled a knife on a Falun Gong practitioner.

In August, the HKYCA sought to cause problems for a classical Chinese dance competition sponsored by New Tang Dynasty Television, a media partner of The Epoch Times.

The CCP uses alliances with front groups—organizations without public ties to the CCP—to advance the Party’s interests. The HKYCA appears to be such a group.

It was registered as a business in Hong Kong on June 8 and shares the address of a company called the Digital Drive Association. The current chairman of the company, Yao Ming, is the assistant to a legislative councilor for the pro-Communist political party, Democratic Alliance for the Betterment and Progress of Hong Kong (DAB).

A man named Lin Guo-an has claimed to be the person in charge of the HKYCA. He has said he has held several public office positions and was involved in youth services. But upon investigation by the reporter, Lin Guo-an was found to be the name of a member of the Jinggangshan City Political Consultative Conference in Jiangxi Province in China. When confronted with this by The Epoch Times reporter, Lin did not deny it.

For instance, Chow Wai Tung, district councilor of the Democratic Party in Hong Kong, said that the government should take action against the HKYCA, which instead of exercising freedom of speech, is attempting to prevent Falun Gong practitioners from exercising their own freedom to speak out against repression in China.