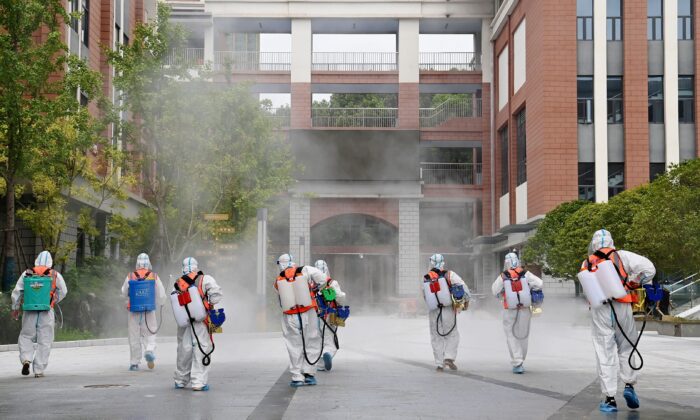 Workers in protective suits disinfect the compound of a primary school before schools reopen for the upcoming semester, in Wuhan, Hubei province, China, on Aug. 25, 2021. (China Daily via Reuters)
CCP Virus

BEIJING—A city in southern China that is trying to contain a COVID-19 outbreak told the public Sunday not to leave town, suspended bus and train service, and closed cinemas, bars, and other facilities.

Anyone who needs to leave Putian, a city of 2.9 million people in Fujian province south of Shanghai, for an essential trip must have proof of a negative COVID-19 test within the past 48 hours, local authorities announced.

The first cases in Putian were students from Xianyou county, according to the state-run Global Times newspaper. The actual number of cases is difficult to verify, as the Chinese regime routinely suppresses or alters information.

The traveler, identified by the surname Lin, underwent a 14-day quarantine and nine nucleic acid and serologic tests, all of which were negative, the Global Times said, citing local authorities. It said he tested positive on Friday.

Residents of villages in Xianyou where infections were found were barred from leaving, the newspaper said.

Elsewhere in Putian, cinemas, card rooms, gyms, tourist sites, and other facilities were ordered closed, local authorities announced. Restaurants and supermarkets were told to “strictly control” customer numbers and to check for fevers. Schools were ordered to require students to wear masks in class.