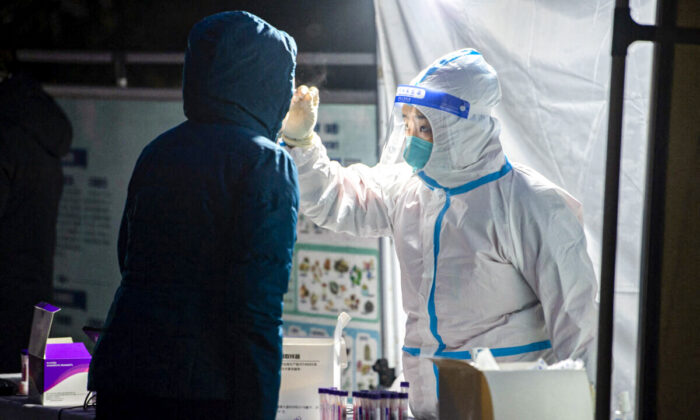 A medical worker is taking a swab sample from a resident to be tested for the Covid-19 coronavirus in Xi'an city, Shaanxi Province, China, on December 25, 2021. (STR/AFP via Getty Images)
CCP Virus

The communist regime in China has further tightened travel restrictions in the northwest city of Xi’an since Dec. 27, as it races to contain its largest reported surge in COVID-19 cases in nearly two years.

Xi’an, which is the capital of Shaanxi Province, reported 150 fresh cases on Dec. 27, pushing the total number of those infected to 635 since Dec. 9.

Given that the Chinese regime is known to grossly underreport its virus numbers, the official figure likely doesn’t reflect the true total. But the figure represents the highest reported daily count since COVID-19 first emerged in Wuhan.

Chinese health authorities blamed the Delta variant for a rise in infections spanning five provinces, including Beijing. The capital city, which is about 625 miles from Xi’an, is set to host the Winter Olympics in six weeks, which the regime has pledged to be a “safe” event.

More than 13 million residents in Xi’an have been confined to their homes for five days as the local authorities are under pressure to contain the cluster as soon as possible. The regime’s corruption watchdog said in a statement that 26 officials from the city were punished for “not doing a good job” in controlling the pandemic.

Lockdown measures were tightened on Dec. 27, and residents were banned from driving cars on the roads, according to a notice from the Xi’an public security bureau. Rulebreakers could face up to 10 days in police detention and a fine of 500 yuan ($78.48), the notice reads.

The authorities also said they would suspend the policy of allowing one person per household to buy groceries every two days. Until Dec. 27, residents had been required to stay home except when being tested for COVID.

A resident who gave her surname as Zhou told The Epoch Times on Dec. 26 that people were only allowed to buy necessities in stores within their compound. Living in the medium-risk Lianhu district, she said she had been barred from leaving her residential area.

The city has run at least three rounds of mass testing, and sent 28,983 people to centralized quarantine.

Anyone who refuses to follow the rules during testing, including keeping three feet from each other while standing in lines, could also face detention and a fine, police said.

Dongyan Jin, a virologist at the University of Hong Kong, said the mass disinfection of outdoor air and surfaces seemed unnecessary, given the low risk of people catching COVID-19 from outdoor surfaces or the air with so few people outside.

“This is shooting mosquitoes with a cannon,” said Jin, although he said he believed disinfection of indoor surfaces, especially in places visited by infected people, was necessary.