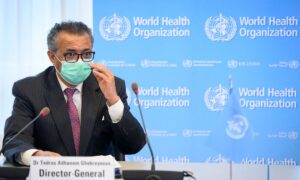 More Than a Year After Declaring Pandemic, WHO Calls for ‘Audits’ of Wuhan Labs
0
Share Now
TelegramFacebookTweetEmailTellMeWeReddit
Copy Link 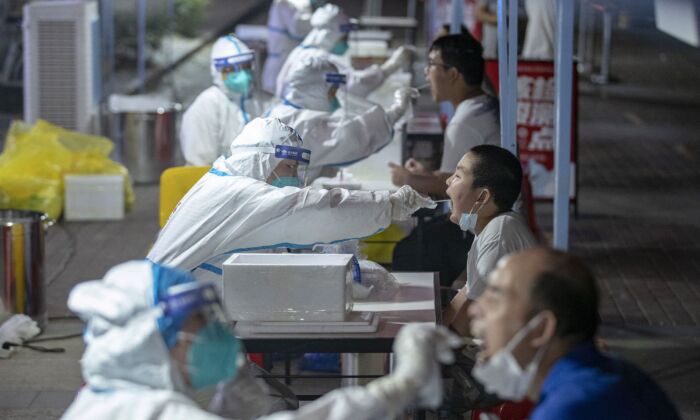 Residents are receiving nucleic acid tests for the coronavirus in Wuhan in China's central Hubei province on Aug. 3, 2021. (STR/AFP via Getty Images)
INSIDE CHINA

An eastern city has become the first in China to offer significant financial rewards to people who report public gatherings. Authorities across the nation are scrambling to contain new outbreaks of the Chinese Communist Party (CCP) virus, also known as COVID-19, especially with more breakthrough cases emerging.

Officials in Tai’an city, in China’s coastal Shandong Province, paid a resident $15,000 on Aug. 3. The individual reported a company group training in a hotel on July 30, according to local state media.

Authorities said organizers didn’t report the 12-day training to the local government, and its attendees came from several cities across China. After the attendees’ tests came back negative, they were ordered back to their homes.

It is the latest of a number of regions to introduce cash incentives as part of a recent campaign to battle the new outbreak. Authorities in cities, counties, districts, and even the lowest government level—neighborhood committees— from at least eight provinces announced financial rewards to members of the public for providing tip-offs about the CCP virus. The latest outbreak started in Nanjing city, with nine airport cleaners infected on July 20.

A neighborhood committee in Yangzhou city announced residents could receive a $310 reward if they reported others who had traveled from infected areas or had close contact with confirmed cases. A district office in the city offered to pay people $775 for providing information, and would double the reward if the case is confirmed, according to state news outlet ThePaper.cn.

Yangzhou, about one and a half hours drive from Nanjing, has become the latest hotspot, reporting 32 cases on Wednesday. Although this figure likely does not reflect the actual total, given that the Chinese regime is known for grossly underreporting its virus numbers, it accounted for almost half of the 73 confirmed across the country on Wednesday.

Authorities attributed the outbreak in Yangzhou to a 64-year-old female citizen who failed to inform local officials after traveling back from the epicenter Nanjing on July 21. Before seeking treatment for cough and fever on July 27, she frequently visited crowded places, including entertainment centres used for playing cards and mah-jong, restaurants, and shops, according to state mouthpiece Xinhua.

Local police have detained the woman, according to the report.

Yangzhou authorities have also set up a special hotline for members of the public to report information related to the spread of the CCP virus.

Chinese commentator Li Muyang said the cash incentives indicate that authorities are under pressure to squash the CCP virus outbreak. But Li suggested officials worry more about their positions than the safety of local citizens.

The mayor of Yangzhou city resigned on Aug. 2. The provincial governor criticized the mayor on Aug. 1 because COVID-19 positive patients were identified too late, resulting in the city’s situation becoming “complicated and serious.”

The CCP’s top anti-corruption body punished 18 officials in Zhangjiajie city on Wednesday. Many of the latest cases emerging nationwide are related to a performance held in this popular tourist destination on July 22. Authorities are now trying to track down over 2,000 people who attended it.

Shanghai health officials reported on Aug. 3 that an inoculated airport worker had returned a positive test result of the CCP virus. The head of the Shanghai panel overseeing the treatment of COVID-19, Zhang Wenhong, confirmed the infected worker had been vaccinated.

“The staff had received vaccines, of course, because the high-risk group must be vaccinated according to the vaccination rules,” Zhang said at a press conference on Tuesday. He added that 85 percent of the adult population in Shanghai, the largest city in China, had been vaccinated, and all airport workers were inoculated.

Gene sequencing results show a high match of the Delta variant, but it is not related to the new cases in Nanjing, authorities said on Wednesday.

Shanghai had tested over 68,000 people related to the case on Aug. 4, Shanghai health officials said.

China’s recent infections stemming from the Nanjing Lukou International Airport have hit 17 of all 31 provinces. Nanjing’s health authorities admitted on July 22 that almost all of the infected workers had received vaccines, except for one person under 18 years old.

In another coastal city, Xiamen, next to the Taiwan Strait, an airport worker, and his three family members were confirmed to be infected with the CCP virus on July 30. The local authorities did not mention whether they had received Chinese vaccines, but airport workers are listed as a high-risk group on China’s vaccination priority list.

Xiamen city has completed 93 percent of the second round of mass testing, collecting over 420,000 samples as of Aug. 3, state media ChinaDaily reported.

In response to the rising number of breakthrough cases, the Chinese regime has doubled down on its containment approach with mass testing and strict lockdowns.

Zhuhai, a city neighboring Macao, announced the first round of mass testing of 2 million people on the evening of Aug. 4.

Wuhan city of Hubei Province, where COVID-19 was first identified in late 2019, started to test its 13.5 million people on Tuesday. A “state of emergency” status has been declared in Hubei, resulting in provincial authorities launching strict measures to battle the spike in cases of the CCP virus, which prompted citizens to raid supermarkets for food supplies.

The recent flood-stricken Zhengzhou planned to complete the second round of mass testing of its 12.6 million residents on Aug. 6, state-back news agency Xinhua said.

In capital Beijing, the CCP has sealed off residential compounds on Wednesday, where the three new confirmed cases live. A resident surnamed Li confirmed to The Epoch Times on Wednesday that they are not allowed to go out and were waiting to receive the nucleic acid test.

Meanwhile, authorities of all 31 provinces have urged people to avoid travel and gatherings while many domestic flights, ships, and trains have been canceled. State media reported that the Chinese regime tightened the border controls, suspending the issuing of entry and exit documents for non-essential, non-emergency travel.