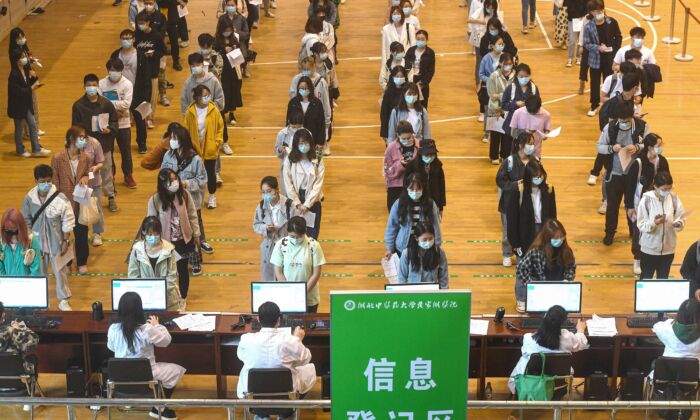 Health authorities in central China’s megacity Wuhan confirmed a rare case of cholera on Monday days after a university student came down sick with the disease.

An owner of a store in the dormitory area of Wuhan University told The Epoch Times on Monday that the school has been closed since the day before, and was not allowing outsiders to enter.

A female doctor at the emergency department of Wuhan University Hospital said that she had not yet received any official notification, but the school was already tracing contacts. As to how long the investigation and testing would last, they are still waiting for an official notice from the Wuhan Health Commission.

Cholera is an acute diarrheal infection caused by the ingestion of food or water contaminated with Vibrio cholerae.

Wuhan University issued a reminder on the prevention of intestinal infectious diseases in summer on its official website on Sunday, requesting anyone who had symptoms of diarrhea and vomiting to report to the university clinic immediately.

The case sparked public concern and became a top search on Chinese social media, while the country is amid a resurgence of COVID-19.

A netizen said in a post, “Why is it Wuhan again?”

Another said: “These last couple of years life has been turbulent; now this, how can we get on with our lives?”

Meanwhile, the Chinese communist regime has tried to shift the blame for the Cholera case onto the United States.

The Central Committee of the Chinese Communist Party (CCP)’s Youth League posted on its official Weibo account a report of a supposed Russian investigation that claimed the United States was “carrying out human experiments in the Kharkiv mental hospital in Ukraine”. The claims also accused the United States of “collecting and sorting out Cholera pathogen in Mariupol”, and “developing Biological Weapons in labs in Ukraine.”

No specific information about the alleged Russian investigation was given in the post.

They claimed in their posts that the U.S. ambassador is suspected of “poisoning”, and “the United States has been causing a lot of harm to people”.

A memorable visit to #Wuhan University with President Dou. Good to see the revival of educational collaboration with major American universities. ⁦@WHUni_Official⁩ pic.twitter.com/SMeBmzWWRI

However, other Chinese netizens countered the claims, pointing out: “Why would a U.S. ambassador do something like poisoning? Don’t imagine such things. The student got infected by dining in a restaurant outside the university.”

Previously, the Chinese regime has also tried to shift the blame for causing the COVID-19 pandemic to other countries such as the United States, by claiming that the virus came from U.S. military personnel who attended the 2019 Military World Games in Wuhan and from the packages of imported frozen food from Europe.

Gao Miao and Hong Ning contributed to the report.