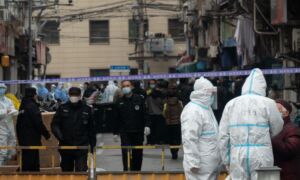 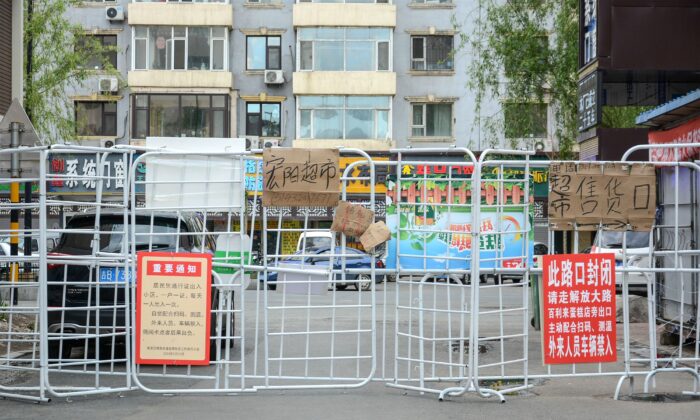 Barriers separate a residential compound in Jilin in China's northeastern Jilin Province on May 25, 2020. (AFP via Getty Images)
INSIDE CHINA

China’s recent surge of CCP virus infections has made life difficult for local residents in Tonghua, a city located near the North Korean border in northeastern China’s Jilin Province.

Ms. Liang, a businesswoman in Dongchang district in Tonghua, told the Chinese-language Epoch Times that local authorities began to seal off her community on Jan. 15, nearly a week before the official announcement.

Tonghua municipal officials announced that Dongchang residents would be subjected to “seal-off management” beginning at 10 p.m. local time on Jan. 21. The announcement said residents wouldn’t be allowed to leave their homes, and local community officials would deliver the required living necessities.

It turned out the “seal-off management” was not limited to Dongchang district but included other areas in Tonghua.

Liang said the decision by local authorities to seal off households came abruptly—local officials put seals on her doors one early morning without any advanced notice.

Now in isolation, Liang says she’s running out of food, with many of her friends facing a similar crisis. She’s unable to leave her home, being told that she will be arrested by the police if she tries to leave.

“I’ve run out of meat. The only vegetable I have is a single Chinese cabbage. I have also run out of noodles, and I have a half bag of rice left. So I have a one- or two-day supply of food left. I don’t even have eggs. I didn’t know we would be sealed off for such a long time,” Liang said.

She added that nobody has delivered food supplies to her as the government promised, and online food delivery services are slow and expensive.

She said that the food shortage problem hasn’t been limited to Dongchang district. Families in other parts of Tonghua are facing the same problem.

According to official government data from Jilin’s provincial health commission, at least 196 people in Tonghua have recently tested positive for the CCP (Chinese Communist Party) virus, commonly known as the novel coronavirus, as of Jan. 24.

However, due to the Chinese authorities’ past record of underreporting infections and covering up information, it’s difficult to assess the true scale of the outbreak. Tonghua has a population of about 2.3 million.

Liang also complained that the local government made a U-turn on one of its policies. She said initially residents were told they could apply for a household certificate, allowing one person per household to leave the house every three days. But the policy never materialized.

“There is definitely panic among people,” Liang said, adding that locals should be allowed to leave their homes to buy food at least twice a week.

A male businessman in Dongchang, who declined to give his name for fear of repercussions for speaking to independent media, said his family only had enough food for one more week, and had run out of fruit. He said he hadn’t received any food supplies from local officials, and his doors had been sealed.

He expressed concerns about his wife, who is due to give birth at the end of March. He said he doesn’t know whether she can still attend her regular pregnancy checkup since her hospital is now being used as a quarantine hospital.

In a press conference on Jan. 24, Jiang Haiyan, Tonghua’s deputy mayor, apologized for delays in the delivery of living necessities to households.

One netizen from Tianjin wrote: “I don’t want to see apologies. I want to see people having food to eat and taking their necessary medication … toddlers having powdered milk to drink.”

Another netizen, from Beijing, wrote: “What good is an apology. It has been a year since the outbreak started, and we still cannot deliver supplies to people in a timely manner.”

Guo Xiaohua and Zhang Yujie contributed to this report.