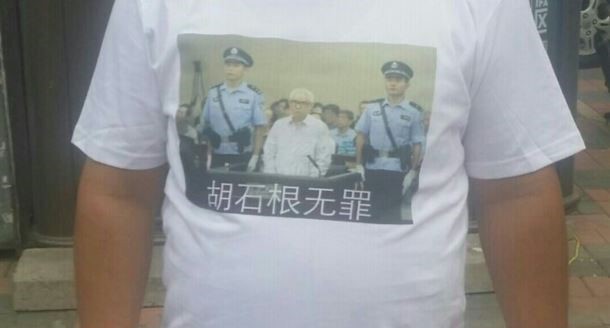 A supporter wearing a shirt imprinted with Hu Shigen in a court hearing on Aug. 3, 2016. Hu, a human rights advocate, was sentenced to seven years in prison for subverting state power. (via VOA)
China

In response to the jailing of a prominent Chinese democracy activist, Chinese citizens have stepped forward by donating their money.

On Aug. 3 the Tianjin Second People’s Intermediate Court found Hu Shigen guilty of “damaging national security and harming social stability” and sentenced him to seven years in prison, according to state-run media. His sentencing came one year after his arrest during the 709 incident—a massive state-wide crackdown targeting hundreds of lawyers and activists that began on July 9, 2015.

A crowd-funding campaign that started on Aug. 21 has after one week raised around 210,000 yuan ($31,460), with some one thousand people participating. The campaign will last until the end of August. The average annual salary of a worker in China in 2015 was 62,029 yuan ($9,284), according to the website tradingeconomics.com.

Hu, 61, was an advocate of free speech and the leader of several underground churches in China, which are repressed. Hu previously spent 16 years in prison from 1992 to 2008 for his involvement in founding the Chinese Free Democratic Party and in publicizing the Tiananmen Square massacre, which saw hundreds, if not thousands, pro-democracy protesters killed in a violent repression.

Hu Jia, a Beijing civil rights activist who initiated the campaign, noted that Hu Shigen received the harshest sentence among those convicted during the incident. “We think that the authorities are making him the main target for crackdown, so we also want to clearly present our stance on this issue,”  Hu Jia said in an interview with Radio Free Asia on Aug. 29.

The donations ranged from pennies to ten thousand yuan. According to Hu Jia, the donations will be used for the activist’s nourishment while in prison, family visits, retirement, and other public welfare under Hu Shigen’s approval.

“All of the conscientious people living in this country should show some concern for Hu Shigen,” Zhao Changqing, a leader during the 1989 Tiananmen Protest, told RFA. “Teacher Hu is getting old, we have to do everything we can to ensure his health, so we did this trivial thing.”