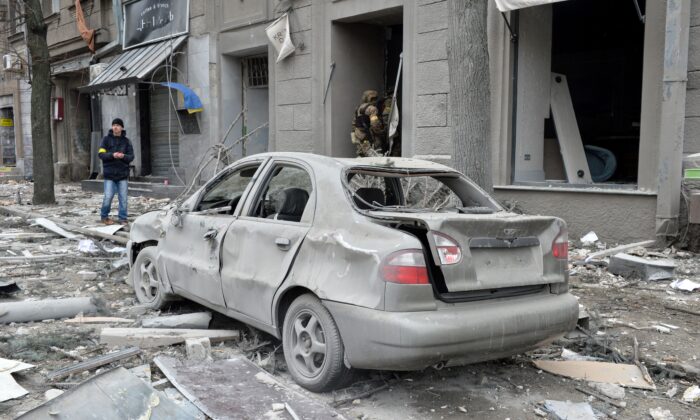 A view of the square outside the damaged local city hall of Kharkiv, Ukraine, destroyed as a result of Russian troop shelling, on March 1, 2022. (Sergey Bobok/AFP via Getty Images)
Chinese Regime

Amid Russia’s invasion of Ukraine, when many countries had already evacuated their citizens and students from the war, Chinese nationals were surprised to find that the Chinese Communist Party’s (CCP) promise to evacuate people was unreliable, and that the official number of evacuations it claimed to have made included the Chinese who fled from Ukraine on their own.

The Chinese Embassy in Ukraine said on Feb. 28 that it had organized the evacuation of the first batch of 400 Chinese students from Odessa, Ukraine. On the same day, some 200 Chinese students would leave Kyiv, the capital of Ukraine.

Yet Chinese nationals in Ukraine have complained of a lack of support from the embassy, with some forced to find their own ways out of the war-torn country.

Ding Jianwei, press counselor of the Chinese Embassy in Ukraine, was quoted by guancha.cn as saying that nearly 1,000 more Chinese would leave Ukraine on Mar. 1, “including Chinese students and overseas Chinese who voluntarily left [that is, left on their own].”

Another Chinese in Ukraine said, “The embassy is currently only in registration mode. There is no charter flight for evacuation, so all the planes you see online that have already returned to China or are about to return to China are just rumors.”

Chinese media reports say charter flights are difficult as the situation in Ukraine continues to deteriorate and airspace has been closed. But some Chinese students said in WeChat groups that India is evacuating its students to neighboring countries and then flying them home from there on chartered flights.

The CCP embassy in Ukraine said more than 6,000 overseas Chinese had registered to leave, adding that the embassy had called to confirm one by one to ensure that all of them could be evacuated in time through different channels.

But one student said he couldn’t get through to the embassy by phone. “My classmate told me to gather in front of the Red University Building in Kyiv after receiving the notice from the embassy, but many of us didn’t know that… We don’t understand why only a few people were notified of the evacuation, not all of them.”

“We were hoping that our mother country would be able to take us home as quickly as the West, [but] now I feel so disappointed. Some people in the group said [we] have to understand mother country, but I can’t understand. I don’t want to become part of the casualty number.”

Another expressed disappointment and helplessness at the CCP authorities: “Thailand has withdrawn all its nationals. India has also withdrawn its 16,000 people, yet Ukraine still has more than 6,000 [Chinese] students. I feel a little helpless.”

One Chinese in Odessa, Ukraine, told The Epoch Times, “We are all in a panic. Everyone is trying to find a way to escape. Some people are still waiting for the embassy to make arrangements; many are discussing how to run away in a makeshift WeChat group.”

“I heard that the subway is too crowded now to get on. I don’t dare to go out. I don’t know what’s going on outside.”

“It’s not easy to even find a bus now when a war is going on.”

Another Chinese named Mu Feng (pseudonym) told The Epoch Times, “There are Chinese people in bomb shelters in both Kharkov and Kyiv in Ukraine. The situation is dangerous. [They’re] under shelling and bombing now.”

“It’s early morning in Ukraine. People are sleeping in fear, wondering every moment if they’re going to be bombed.”

A Chinese man, whose wife is Ukrainian, described his family’s situation this way: “I could see the armored vehicle through the window. My child woke up because of the alarm. My wife was sealing the window with tape…”

Another Chinese posted in a WeChat group that it was becoming more and more expensive to flee Ukraine as the war dragged on. “It cost $1,000 for a [train] seat yesterday, so I didn’t leave. I continued to stay in a basement, an air-raid shelter in Kyiv, and have prepared food for one month.”