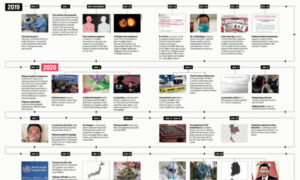 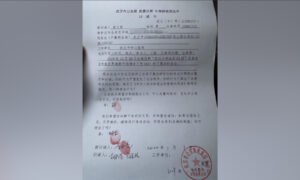 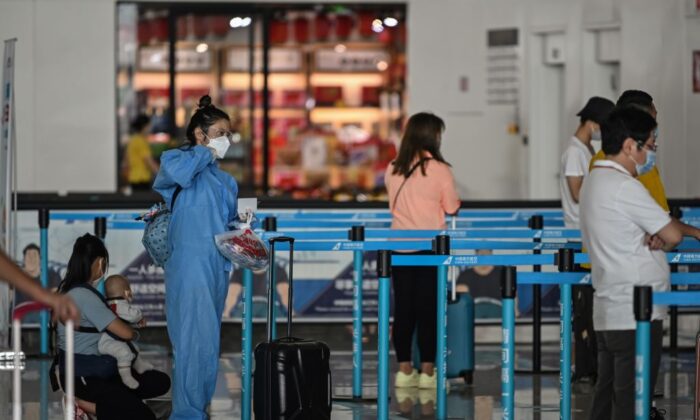 A passenger wearing protective gear and a mask waits in line at an airline counter at Tianhe airport in Wuhan, in central China's Hubei Province, on May 23, 2020. (Hector Retamal/AFP via Getty Images)
Chinese Regime

The first person in China to sue the Beijing regime over its mishandling of the COVID-19 outbreak has filed a new lawsuit after his original legal case was thrown out by a lower court in the central Chinese city of Wuhan.

Zhang Hai says “the Wuhan Intermediate People’s Court has failed to act in accordance with the law. It only informed me by phone that my case was rejected,” according to Chinese human rights news website Civil Rights and Livelihood Watch (CRLW). He’s a resident of Wuhan, the capital of Hubei Province and the city where the CCP virus, commonly known as the novel coronavirus, first emerged late last year.

He said that when the court called him on June 17, he demanded a formal document to explain why the court rejected his case. According to Article 51 of China’s amended Administrative Procedure Law, which took effect in May 2015, courts are required to issue a document with an explanation when turning down cases. But the court refused, instead telling him to look up Chinese laws himself.

“Then, I shall follow the usual protocol by filing my lawsuit at a higher court,” he said. “I want to see how the courts deal with my cases, whether they can safeguard citizens’ litigation rights.”

Zhang sent his new complaint documents via local postal service to the Higher People’s Court in Hubei Province on Aug. 12, according to the CRLW.

He filed his initial lawsuit at the Wuhan Intermediate People’s Court on June 10, seeking compensation of 2 million yuan (about $286,730) from Chinese authorities, alleging that the government’s decision to cover up information about the outbreak caused his father’s death, from COVID-19 complications.

He named three government entities as defendants: the Wuhan city government, the Hubei provincial government, and the General Hospital of Central Theater Command in Wuhan.

After Zhang’s father suffered a bone fracture in Shenzhen city, he drove his father to Wuhan, where the family is originally from, to seek treatment on Jan. 17. His father was admitted to the hospital for surgery.

While the operation was successful, Zhang said his father developed a fever and tested positive for the virus on Jan. 30. His father died on Feb. 1.

Zhang said he wouldn’t have driven his father to Wuhan if he had known that the outbreak was so severe.

According to CRLW, Zhang filed a legal document to prosecutor offices in Wuhan and Hubei, as well as the Higher People’s Court in Hubei, asking them to take legal action for the Wuhan Intermediate People’s Court’s rejection.

“I want the entire society to see how courts of different levels deal with legal cases, whether they would give me a chance to present my case. I am not afraid of losing the case, but others are afraid of me bringing up my case,” Zhang said, according to CRLW.

He only heard back from the provincial prosecutor’s office, which sent him a text message confirming that the office had received his document.

Since filing his original lawsuit, Zhang said he and his family have been harassed, and local police have shown up unannounced at his residence.

Lu Miaoqing, a lawyer based in the southern Chinese city of Guangzhou, expressed hope to CRLW that the Higher People’s Court in Hubei would comply with the law and safeguard Zhang’s right to litigation.

Lu is a member of the “COVID-19 Compensation Legal Advisory Group,” a consultancy group formed in March by two dozen lawyers and rights advocates in China and Chinese dissidents in the United States. The group offers legal advice for victims in China who seek compensation and redress from Chinese authorities in connection to the outbreak.

The CCP virus originated from the central Chinese city of Wuhan in late 2019 and authorities went to great lengths to cover up the outbreak, silencing whistleblower doctors and not initially disclosing that the virus could be transmitted among people.

Zhang wasn’t the first to have his case thrown out by the Wuhan Intermediate People’s Court without explanation. Late last month, a Wuhan resident surnamed Xu also got a call from the court rejecting her complaint filed against the municipal government.

Xu claimed that her father’s death due to COVID-19 was a direct result of the municipal government’s negligence in handling the outbreak.