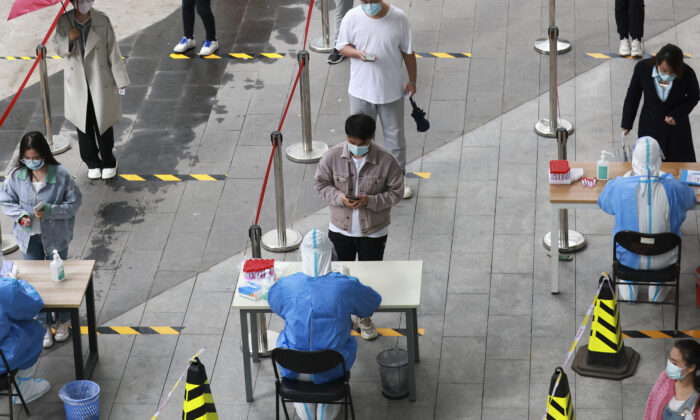 People waiting in line for nucleic acid testing at a business center in Chaoyang District on April 27, 2022 in Beijing, China. (Lintao Zhang/Getty Images)
INSIDE CHINA

Omicron cases have been breaking out in cities across China, including the capital Beijing, leading to residents fearing they will have to undergo a draconian zero-COVID lockdown as seen in Shanghai.

As of Thursday, it is understood that 44 cities are under either a full or partial lockdown, reported western media CNN and Japanese investment bank Nomura.

From April 22 to 25, Omicron cases shot up in Beijing, roughly half of which were found in the Chaoyang, which is one of the city’s 16 districts. With a population of  3.45 million, the district identified more than 1,200 close contacts and designated 14 containment areas, according to data from the Beijing Municipal Health Commission.

Massive nucleic acid testing was being conducted for people living and working in the district from April 25 onwards and will continue every two days until April 29.

On April 26 the local authorities started testing most of the city’s 21 million residents, stoking fears that a citywide lockdown was imminent.

News of the outbreak in Bejijng and escalating anti-virus measures caused some in the city to panic out of fear that a Shanghai-style lockdown was on its way.

Many residents in Chaoyang, flooded supermarkets buying vegetables, meat, and all kinds of necessities. Images of empty shelves and long queues for checkouts were seen on social media.

A Shanghai netizen’s lockdown experience titled “11 points of blood experience” have been widely circulated in Beijing as a lockdown survival guide that includes advice on how to stock up on food and other essentials.

But Beijing resident Liu Xin, a China Global Television Network anchorwoman, expressed the opposite opinion to official media that touts Beijing has a sufficient “supply of necessities. ”

Liu tweeted photos on April 24 taken in a city supermarket with accompanying text that said: “Beijing’s turn. But we are getting ready. I stocked up too, for the first time in two years. Let the tough times come.”

The post has since been deleted but a copy of it is below.

Gongshu District of Hangzhou, the capital of Zhejiang Province, on April 19 reportedly found a cluster of infections, with an average latent period of only 2.67 days, the “fastest spread” of an outbreak in the city, according to China News on April 24.

The report said that infections spread to five urban areas with “a possibility of further dissemination” due to the unknown source and potential transmission of the disease to schools and other crowded places.

Hangzhou authority strengthened the containment of a three-day nucleic acid test for all staff in three districts under its jurisdiction starting April 23.

After the outbreak in Shanghai, the nearby provinces of Jiangsu and Zhejiang provided some of the housing needed for isolation purposes, with Hangzhou alone, less than 200 km away, exceeding 5,000 rooms.

The 2022 Asian Games—scheduled to be held in Hangzhou in September—are facing the possibility of being postponed, Husain Al-Musallam, general director of the Olympic Council of Asia, told AFP on April 22.

Zhejiang Province’s Yiwu city is another one grappling with COVID.

On April 21, the Yiwu authority implemented a “three-zone supervision mode” against the pandemic, dividing the city into a contained zone, a monitoring zone, and a precautionary zone.

The contained zone requires an area to be sealed off and residents confined to their homes. The other two zones allow for limited movement of residents.

A Yiwu businessman told The Epoch Times, that for the time being, the contained areas are not large enough to affect the city’s economics but that could change.

“As soon as a positive case emerges, the residential area will become a contained zone. What’s more, the scope of this three-zone mode may change at any time,” he said.

Ellen Wan contributed to this article