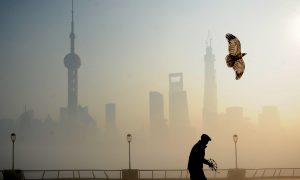 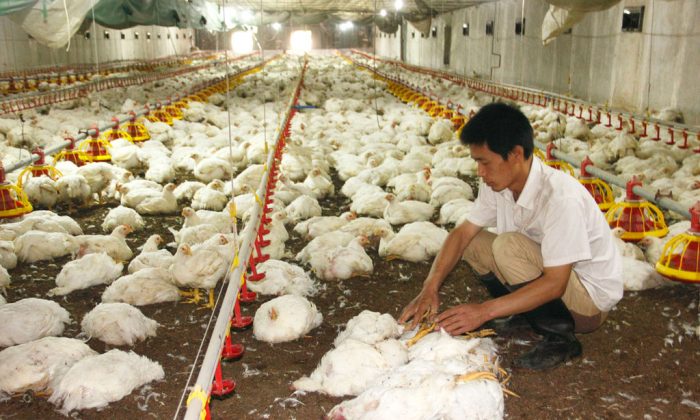 A chicken farmer in China's Shaanxi province picks dead chickens out of the live ones on July 3 in his henhouse. Chickens processed in China were banned from U.S. public school lunches in the proposed federal budget. (ChinaFotoPress/Getty Images)
China

Kids in public schools might have been served chicken processed in China, were it not for an amendment included in the omnibus spending bill passed by Congress last week.

“None of the funds made available by this Act may be used to procure processed poultry products imported into the United States from the People’s Republic of China for use in the school lunch program,” states the revised bill.

DeLauro introduced the amendment, which was co-sponsored by Representative Chellie Pingree (D-ME). The $1.1 trillion federal omnibus spending bill that funds the federal government still has to make it past President Barack Obama’s desk. It was passed by the House of Representatives on Dec. 11 and the Senate on Dec. 13.

The USDA approved China to process chickens for the U.S. market in August 2013. Four Chinese poultry-processing plants are currently approved to ship cooked chicken to the United States, as long as the chickens were raised and slaughtered in the United States, Canada, or Chile.

China’s approval to sell cooked chicken to the United States has been met with deep controversy—mainly because of its history of tainted products, and lax standards on quality and safety.

“While the plants and processing methods have been deemed initially safe by the USDA, lax enforcement going forward could expose U.S. consumers to serious risk of food borne illness, especially given the appallingly poor food-safety track record of Chinese food products,” Senator Charles Schumer warned in a September 2013 press release.

The FDA has also faced numerous hurdles with inspecting facilities in China. According to the U.S.-China Economic and Security Review Commission’s 2013 report, the FDA has “found it difficult to increase on-the-ground inspections on the Mainland, in part because Chinese authorities have delayed visas for FDA inspectors and restricted access to food production sites.”

DeLauro said her move to ban Chinese chicken from U.S. school lunches was mainly out of concern for the safety of kids.

“China’s food safety record is atrocious, yet last year USDA deemed poultry processed in China to be as safe as poultry processed here,” she said, in the press release. “Children are among the most susceptible to foodborne illness. We cannot take unnecessary risks with their health.”

DeLauro and Pingree added their provision to a bill funding the USDA earlier this year. Their provision was then included in the omnibus spending bill.

“Chinese chicken does not belong in school lunches,” Pingree said, in the press release. “China has such serious food safety problems that even Chinese consumers don’t feel safe eating some of the food that is processed there.”