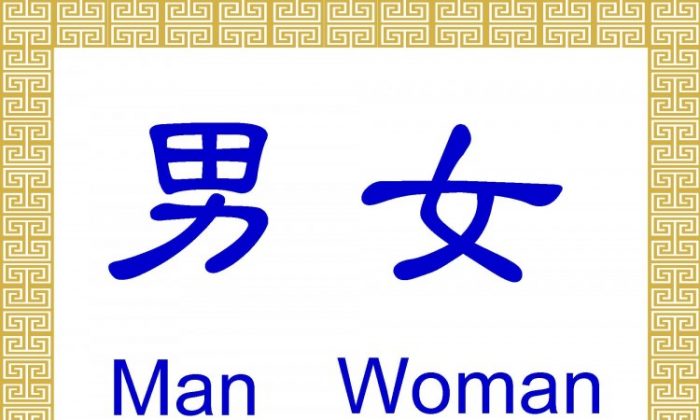 The Chinese character 男 (nán) stands for man, which consists of two separate characters. The upper part 田 (tián) means field and the lower part 力 (lì) means strength. The character symbolizes how men are supposed to be strong and work in the field.

This is how the classic “Explaining Simple and Analyzing Compound Characters” describes it. In ancient China, it was said: “Men rule the affairs on the outside.” Therefore, farming, war, fighting, being an official, and conducting business were all affairs of men.

A man is first the son of his parents; then, when he gets married, the husband of his wife, and when they have children, the father of his children.

The Chinese character 女 (nǚ ) stands for woman. All characters with 女 have something to do with a woman, such as 妻 (qī​, wife), 婦 (fù, housewife) and 媽 (mā, mother). The right part of 婦 (housewife) is a broom and the left part is woman. Traditionally, a housewife in China took care of the affairs in the household, such as cooking, cleaning, and sewing.