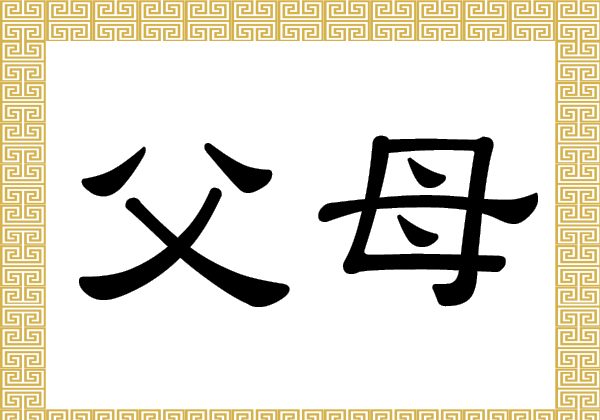 父 (fù) is a very old character that has gone through many morphological changes in its composition. It means “parent” or “father” in general, and is always used to represent male figures.

In ancient times, 父 was written in a more pictorial way, depicting a hand holding a stone axe, with a stroke on the top left representing the axe, and the rest of the character representing the hand.

Holding a stone axe symbolizes strength and bravery. The character 父 later came to refer to the person who is holding the axe, one who is worthy of respect.

Since, in a child’s eye, the one who is the greatest, the strongest, and the most worthy of respect is father, 父 came to represent father—the male figure of authority.

師父 (shī fù), meaning teacher or master, is another important combination. In traditional Chinese culture, teachers (scholarly or spiritual ones) are highly respected, and there is a saying that 一 日為師，終身為父 (yī rì wéi shī, zhōng shēn wéi fù). Namely, “A teacher even for one day should be respected as a father forever.”

母 (mǔ) is also a very old character. It means “mother” and is used to represent nurturing, female figures.

Like most old Chinese characters, it was written in a pictorial fashion in ancient times.

The original character was the same as the character for a woman, 女, depicting a woman in a kneeling position, but with two dots added to the top part to symbolize the breasts of a mother who is nursing her child.

Thus, 母 symbolizes nurturance and fertility. Combined with other characters, it is used to form phrases such as 母親 (mǔ qīn), a more formal form of mother, and 母愛 (mǔ ài), meaning maternal love.