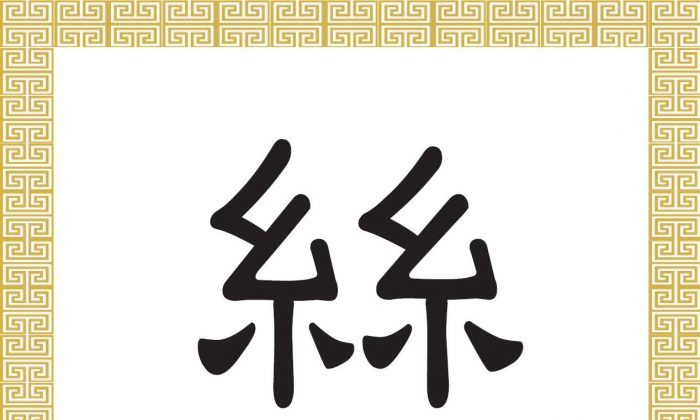 The Chinese character for silk depicts coils of silk or fine thread formed by strands that have been twisted together.
China

The Chinese character 絲 (sī) refers to silk as well as fine thread and thread-like objects such as fibre, wire, or string. The character is also used to describe things of a very small amount.

The character 絲 depicts coils of silk or fine thread formed by strands that have been twisted together.

Gourd, clay, leather, wood, jade or stone, metal, string, and pipe are eight kinds of materials used to make eight types of musical instruments in ancient China. 絲竹 (sī zhú) is a collective term that refers to stringed and wind instruments, such as the pipa and Chinese zither, which are made of 絲 (sī), or silk strings, and the flute, which is made of 竹 (zhú), or bamboo pipe.

絲毫不留 (sī háo bù liú) means not a trace is left behind, and 絲毫無誤 (sī háo wú wù) means something is exactly right and without error.

Silk fabrics were a major export of ancient China, and the important trade in silk gave rise to the name of the famous Silk Road that connected ancient China to the West, called 絲綢之路 (sī chóu zhī lù) in Chinese.

The verse teaches that the silkworm spins silk to enable people to weave cloth, the bee makes honey for people to eat, and if people do not engage in learning, then they are not even as good as tiny insects.