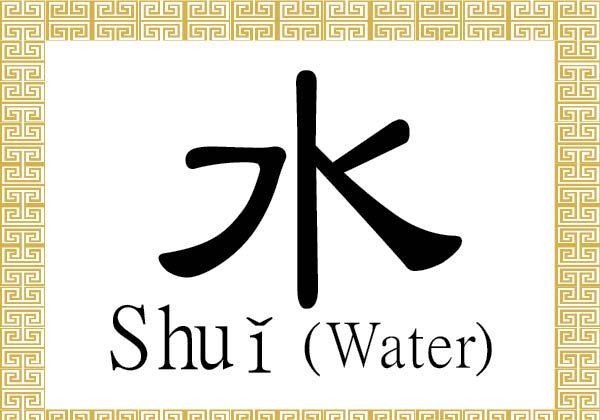 In the Chinese character for water, 水 (shuǐ), the centre stroke indicates a long ripple, while the strokes on either side indicate short ripples. (Epoch Times)
China

The Chinese character 水 (shuǐ) refers to water, a liquid, or a fluid. It can also refer to a river, stream, or other body of water.

水 (shuǐ) is a pictograph that depicts flowing water.

As water flows, small waves of varying lengths are formed along the surface, some long, some short. Thus in the character 水 (shuǐ), the middle stroke indicates a long ripple, while the strokes on either side indicate short ripples.

水平 (shuǐ píng) refers to a standard or level of achievement. The character 平 (píng) has a variety of meanings, including flat, level, calm, and peaceful.

The idiom 白水鑑心 (bái shuǐ jiàn xīn) expresses that white water (白水, bái shuǐ), referring to clear water, is like a mirror that can be used to reflect or examine (鑑, jiàn) one’s heart (心, xīn). It praises someone with a noble character, whose heart is as pure as bright and clean water.

水滴石穿 (shuǐ dī shí chuān) states that dripping water (水滴, shuǐ dī) can wear through (穿, chuān) stone (石, shí). The idiom conveys the principle that as long as one perseveres and continues to make effort, success will surely follow.