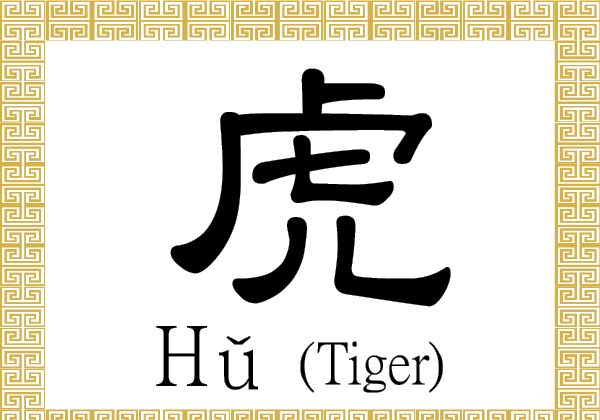 The Chinese character for tiger also refers to being brave or fierce. (Epoch Times)
China

The Chinese character 虎 (hǔ) stands for a tiger and also refers to being brave or fierce.

The character is a pictogram that depicts a tiger standing on its hind legs. It consists of two parts: on the top is 虍 (hū), the radical for tiger, and on the bottom is 儿, two strokes that represent two legs.

Examples of terms that use the character 虎 include 老虎 (lǎo hǔ), another name for tiger; 猛虎 (měng hǔ), a fierce tiger; 劍齒虎 (jiàn chǐ hǔ), a sabre-toothed tiger, or literally a tiger with sword (劍, jiàn) teeth (齒, chǐ); and 虎口 (hǔ kǒu), a tiger’s den, or literally the mouth (口, kǒu) of a tiger.

馬虎 (mǎ hǔ) refers to being careless, sloppy, or negligent, while 馬馬虎虎 (mǎ ma hǔ hǔ) describes something that was done casually and is only of fair or tolerable quality.

虎背熊腰 (hǔ bèi xióng yāo) describes someone with a sturdy and powerful frame, with a back as strong as that of a tiger and a waist as stocky as that of a bear.

虎父無犬子 (hǔ fù wú quǎn zǐ) conveys a similar meaning as the English expression “like father, like son,” meaning that a father who is distinguished and successful will certainly have a son who will do well.