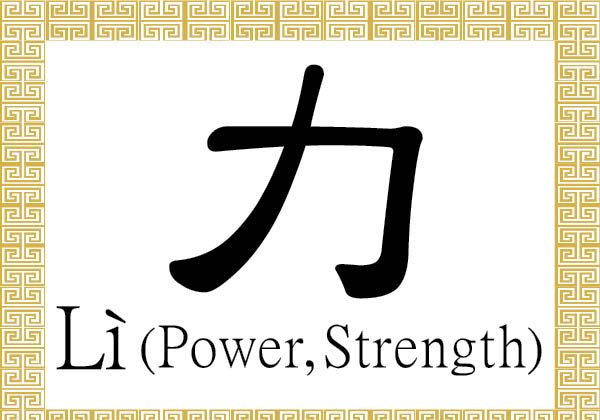 The character for power depicts a person reaching down and using arm strength to pick up an object, and also can be seen as a picture of a plough. (Epoch Times)
China

The Chinese character 力 (lì) refers to power, strength, or force. It can also refer to concepts such as energy, effort, ability, or influence.

力 (lì) is a pictogram that depicts a person reaching down and using the strength of the arm to pick up an object. The 丿 stroke represents the arm and the hooked stroke around it symbolizes the hand.

It can also be seen as a picture of a plough, a heavy tool that requires strength.

Ability, capability, or the power or strength to act is called 能力 (néng lì). 能 (néng) means can or be able to, and also ability, talent, and skill.

精力 (jīng lì) refers to spirit and energy, conveying a sense of vigour. 精 (jīng) means essence or spirit and can also refer to being skilled, refined, or delicate.

The idiom 力不從心 (lì bù cóng xīn) refers to being not as capable as one wishes to be. Sometimes translated as “the spirit is willing but the flesh [physical body] is weak,” the phrase describes one whose capability is not enough to allow one to follow or comply with (從, cóng) one’s heart (心, xīn).

群策群力 (qún cè qún lì) describes teamwork. 群 (qún) refers to the group, and 策 (cè) means to make a plan. The phrase expresses the idea of everyone working together to find ways to contribute in order for the group to manifest its collective role.

一心一力 (yī xīn yī lì), literally “one heart one effort,” describes a united, concerted effort where everyone works together with one heart. A similar phrase is 齊心合力 (qí xīn hé lì), “together [in] heart and effort.”