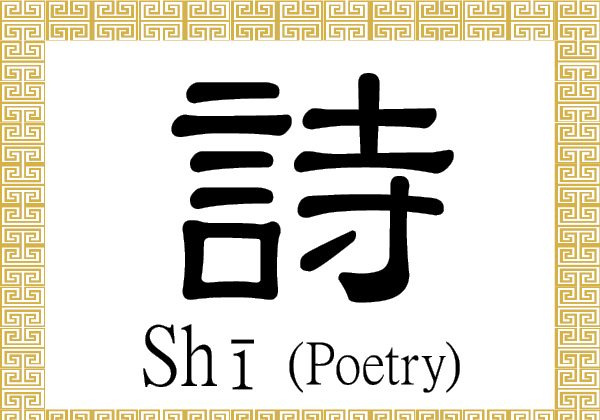 Together, the two components of the character, on the left and the right, can be understood to symbolize poetry as a particularly thoughtful form of language or speech. (Epoch Times)
China

The Chinese character 詩 (shī) stands for poetry or a poem, verse, hymn, or ode.

詩 is a phono-semantic compound, a type of Chinese character consisting of a sound component and a meaning component.

In the character 詩, 言 (yán) on the left suggests the meaning while 寺 (sì) on the right provides the sound.

寺 is the character for a temple, monastery, court, or office, while 言 is the radical/character that refers to words or speech, and also means “to say.” It is an ideogram that represents the idea of speaking via a picture of a tongue sticking out of the mouth.

Together, the two components can be understood to symbolize poetry as a particularly thoughtful form of language or speech.

Examples of terms that use the character 詩 include 詩人(shī rén), a poet; 古詩 (gǔ shī), ancient Chinese poetry; 詩歌 (shī gē), odes and songs, where 歌 (gē) means a song; 詩句 (shī  jù), a verse, where 句 (jù) means a sentence; and 詩韻 (shī yùn), the rhyme of a poem.

如詩如畫 (rú shī rú huà), literally “as if [it is] poetry, as if [it is] a painting,” describes something that is both poetic and visually pleasing like a picture.

唐詩三百首 (tang shī  sān bǎi shǒu) refers to the “300 Tang Poems,” a compilation of about 300 of the best poems by the most prominent poets from the Tang Dynasty (618–907), considered the golden age of Chinese poetry.

The collection was compiled by Sun Zhu (孫誅) around 1763, during the Qing Dynasty (1644–1911). Sun selected the poems based on their popularity and capacity for helping people cultivate or improve their character.

The collection remains a popular classic today that is widely studied. There is a popular saying that anyone who does not know how to write poetry will be able to do so if he or she can memorize the “300 Tang Poems.”