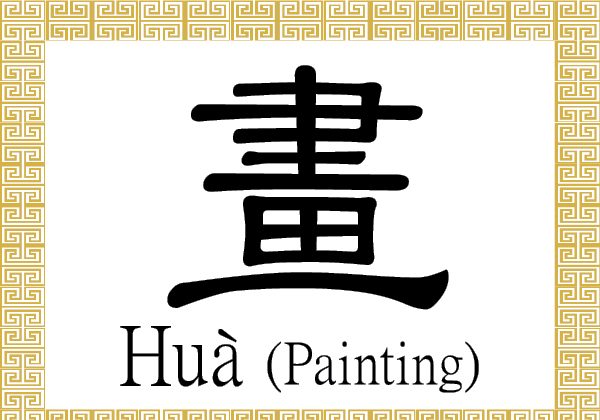 The Chinese character for a painting also refers a drawing, picture, or a stroke in a written character. As a verb, it means to draw or paint, to delineate boundaries, or to design or plan. (Epoch Times)
China

The Chinese character 畫 (huà) stands for a painting, drawing, or picture, and also refers to a stroke in a written character. As a verb, 畫 means to draw or paint, to delineate boundaries, or to design or plan.

The character comprises two parts. On the top is the radical/character for a writing instrument, 聿 (yù), a pictogram that depicts a hand holding a brush.

On the bottom are the radicals/characters 田 (tián) and 一 (yī), which stand for a field and the number one, respectively, representing the idea of plots of land.

The original meaning of 畫 relates to demarcating land and defining property boundaries, one of the earliest activities of human civilization.

The idiom 畫蛇添足 (huà shé tiān zú), “draw a snake and add feet,” advises that it is superfluous to add extra effort when something is already satisfactory; one can ruin the effect and detract from the goal.

畫中有詩, 詩中有畫 (huà zhōng yǒu shī, shī zhōng yǒu huà), literally “within a picture, there is poetry; within poetry, there is a picture,” expresses great praise for a painting that is as poetic as a poem, and a poem that is as vivid as a painting.