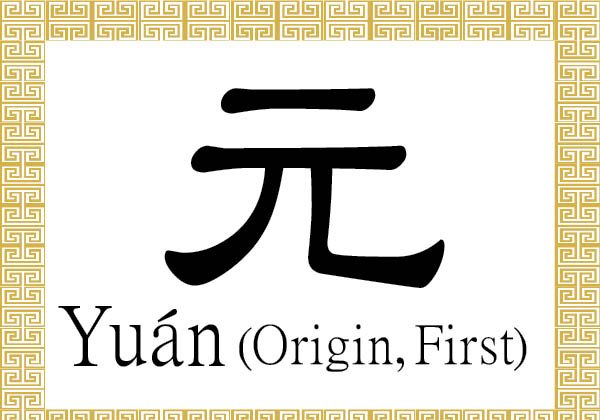 The Chinese character 元 (yuán) stands for the beginning or the origin, and the quality of being original, first, primary, the eldest, or the leader. (Epoch Times)
China

The Chinese character 元 (yuán) stands for the beginning or the origin, and the quality of being original, first, primary, the eldest, or the leader.

元 is formed by the two characters/radicals一 and 兀, according to the first comprehensive Chinese etymological dictionary, “Shuo Wen Jie Zie” (說文解字), or “Explaining Simple and Analyzing Compound Characters.”

一 (yī), the number one in Chinese, originally referred to the idea of the simplest and earliest origin, from which the world was divided into heaven and earth, and then was transformed into all things in the universe.

兀 (wù) consists of 一 (yī) above the character for a human being, 人 (rén), according to “Shuo Wen Jie Zie,” conveying the meaning of a towering and outstanding appearance.

Examples of terms that use 元 (yuán) include 元老 (yuán lǎo), the aged, an elder, or a founding member or senior leader; 元氣 (yuán qì), vitality, vigour, or energy; 元件 (yuán jiàn), a component; and 元素 (yuán sù), an element, such as in the periodic table of chemical elements.

元宵節 (yuán xiāo jié), literally “first night festival,” refers to the Lantern Festival, which concludes the 15-day celebration of the Chinese New Year. It occurs on the 15th day of the first month in the lunar calendar, which is also the first night of the year when a full moon can be viewed.

壽元無量 (shòu yuán wú liàng) is a phrase used to wish someone the blessing of longevity, literally “a life (壽元, shòu yuán) that is boundless 無量 (wú liàng).”

The phrase 元首特權 (yuán shǒu tè quán) refers to the right or privilege (特權, tè quán) of the head of state (元首, yuán shǒu), such as a ruler, emperor, or president. 權 (quán) means authority, power, or right.

元 (yuán) is also used to refer to a unit of currency, and is a synonym of 幣 (bì) in this context.