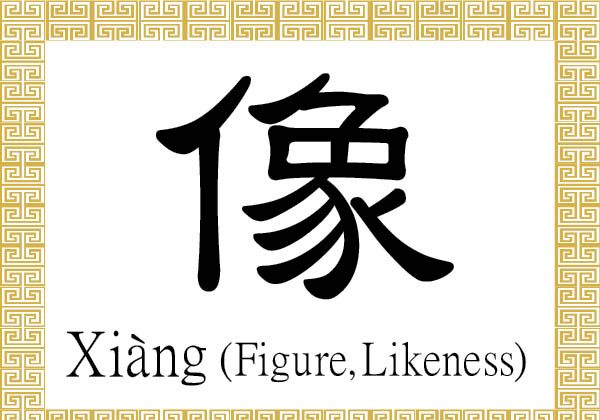 The Chinese character 像 (xiàng) refers to a figure or an image. It also carries the meaning of likeness, resemblance, and similarity. (Epoch Times)
China

The Chinese character 像 (xiàng) refers to a figure or an image. It also carries the meaning of likeness, resemblance, and similarity.

The character consists of two parts. On the left is 亻 (rén), the radical for a man, human being, or humankind, which suggests the meaning for 像 (xiàng) as representing a figure.

On the right is 象 (xiàng), which provides the sound and is a pictographic character that stands for elephant, image, resemblance, or phenomena.

The character 像 is used in combination with other Chinese characters to enhance or refine its meanings related to figures and likeness.

Examples of the use of 像 to indicate likeness include 相像 (xiāng xiàng) or 像似 (xiāng shì), which means to resemble or to be alike, and 好像 (hǎo xiàng), which means as if or to seem like.

想像 (xiǎng xiàng), “image of a thought,” refers to imagination or to the verbs to imagine, conceive of, or visualize, where 想 (xiǎng) means to think or believe, to wish or want, to suppose, or to miss something.

The phrase 像心如意 (xiàng xīn rú yì), literally “like [what is in] one’s heart, as one desires,” describes having one’s wish fulfilled, where 心 (xīn) refers to the heart and 如意 (rú yì) means “as one wants” or “according to one’s wishes.”