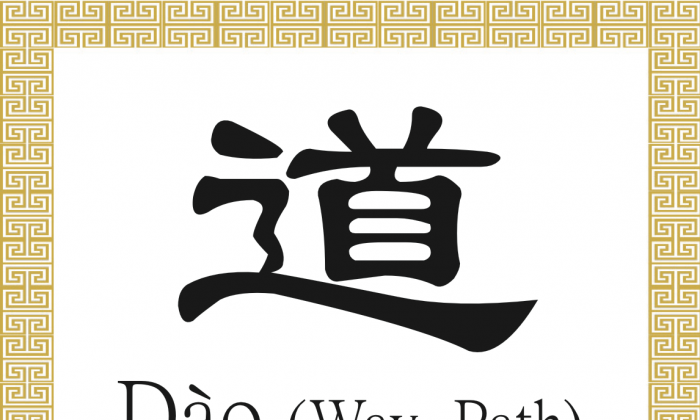 The Chinese character 道 (dào) describes a path, road, or a way or method.

When used in the discussion of traditional Chinese philosophy, Dao is an important concept that refers to the Way of Heaven or the Truth of the universe.

In the two major systems of cultivation practice in China, the Dao School (道家, dào jiā) and the Buddha School (佛家, fó jiā), the goal is the same—to return to one’s original, true self and achieve spiritual enlightenment by cultivating the Truth of the universe.

In the Dao School, the principles that one cultivates are called the Dao, and the goal is to attain the Dao (also written as Tao). Dao also refers to an enlightened being who has achieved the Dao.

In the cultivation way of the Buddha School, the law and principles that one cultivates are called the Fa (法, fǎ), and the goal is to complete cultivation and attain Buddhahood.

In the character 道, on the left and bottom is the radical 辶 (chuò), an alternative form of the radical 辵 (chuò), which means walking, or to walk.

The character 首 (shǒu) on the top-right is a pictogram depicting the head. It refers to the head, a leader or chief, or being first or at the beginning.

Chinese cultivation practice guides one to advance on the right path in both elevating the mind (improving one’s character) and enhancing physical health.

Examples of terms that contain 道 include 道路 (dào lù), a road or way; 道心 (dào xīn), a moral or spiritual nature; 道義 (dào yì), morality and justice, or a sense of righteous honour; and 道理 (dào lǐ), reason or doctrine, especially reasoning or principles that are correct or the truth.

道德 (dào dé) refers to morality, virtue, or ethics. Lao Zi (老子), the founder of the Dao School, is believed to have lived in China about 2,500 years ago. His teachings are contained in the Dao De Jing (道德經), or the “Classic of Dao and Virtue.”

道教 (dào jiào), the religion of Daoism, is distinguished from 道家 (dào jiā), the Dao School, in that the Dao School includes many more practices or cultivation ways that are not part of the Daoist religion; they have no religious formalities and places of worship, etc., but only a teacher and students.

The same is true for the Buddhist religion and the Buddha School.