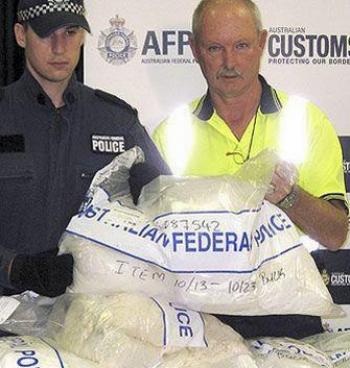 Police display a portion of the 250kg of cocaine, valued at approximately $80 million USD, confiscated the biggest bust in the history of New South Wales. (Internet Screenshot)
World

Epoch Times Staff
View profile
Follow
biggersmaller
Print
A political scandal is unfolding in Australia after a man with links to top-level Chinese and Australian government officials was arrested in the biggest cocaine bust in the history of New South Wales.

Hu Yang, a pro-Chinese communist group leader, has been charged with three counts of drug related crimes, including drug trafficking, utilizing funds obtained through unlawful deeds, and profiting from the illegal sale of narcotics.

According to Australian media, the drugs were hidden inside boxes of green tea imported from China and sent to an Auburn warehouse. Upon surveillance, police tracked down nine suspicious addresses, leading to nine arrests without bail.

Hu’s case was heard in the New South Wales Magistrates Court on July 30, but the case has been delayed because Hu’s bank in mainland China has yet to deliver evidence.

Australia’s Daily Telegraph reported that Frank Hu’s (Frank is Hu’s English name) contacts and influence reached to the highest levels of the Chinese and Australian governments. He was very active politically until the day of his arrest.

“The Sydney businessman boasted of his links to Chinese President Hu Jintao, was photographed with John Howard and cultivated relationships with dozens of federal MPs, although well-known Sinophile Kevin Rudd was silent yesterday on whether he was one of them,” the Telegraph reported.

Two women were also arrested; 18-year-old Wang Danning from Rockdale and Ma Yue, 25, from Allawah. The suspects could face life in prison.

Hu is the CEO of the Australia-China International Exchange Centre (ACIEC) and is known as the “red leader” of the Chinese community. He is a frequent guest of the local Chinese Consulate and an important figure in the Chinese Communist Party’s (CCP) central government.

According to The Daily Telegraph, Hu’s ACIEC office doubled as the office of the CCP- controlled Chinese Central Television Network (CCTV) in Sydney. After his arrest the office was shut down.

As the CEO of ACIEC and president of the Australia-China International Exchange Association, Hu has organised many CCP-initiated events, including international exchange visits and delegations to China.

Hu also received an award for his so-called “outstanding contributions” from the Sydney consulate to celebrate the 30th Anniversary of Australia-China relations.

In addition, Hu was invited to the CCP’s 50th anniversary celebration in Beijing's Tiananmen Square. China’s propaganda machine also made a documentary about him entitled, “Chinese Ambassador to the World – Hu Yang.”

A journalist who wished to remain anonymous claims that the aim of ACIEC is to silently increase the Australian public’s approval of the Chinese communist dictatorship, to pro-actively infiltrate Australia' society’s political realm, and draw in and corrupt Australian federal MPs.

This was to be accomplished through Australia-China cultural relations under the direction of the CCP's United Front Works Department, an organization called the Chinese People’s Association for Friendship with Foreign Countries, and the Chinese embassy and consulates in Australia.

ACIEC was also intended to be used as an opening for the CCP to form a strategic alliance with other Western countries, the journalist said.

Mr. Wang, a Chinese immigrant who has closely followed the case, is suspicious of the delay with Hu's formal court hearing, conveniently allowing it to avoid any bad publicity during the Beijing Olympics.

He says the CCP fears that any disturbance during the Games could have negative consequences, and it was not possible for the CCP to not “give special attention” to the case at this time. So it was to be expected that there would be delays producing evidence, Wang said.

Soon after Hu’s arrest, China News online published a news report which was quickly removed from the website. The entire article did not mention the name of the suspected drug dealer nor did it bring up Hu’s links to the CCP.

China News online also deleted a news article dated July 19 2005, entitled, “The Chinese Consulate in Sydney holds a reception party for the 60th anniversary of victory in the anti-Japanese war.” Also removed was “Chen Haosu leads renowned performing artists and singers in a show in Sydney” published on April 22, 2006, half of which was an interview with Hu who discussed his plan to hold the “CCTV China Sentiment – Movie Times” program.