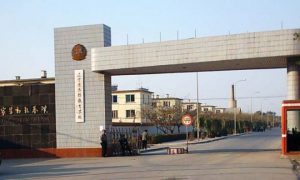 Recently, Chinese-Canadian Lin Shen-Li was holding banners in front of the Chinese consulate in Toronto to demand the Chinese regime release his sister who was arrested for practicing Falun Gong. On July 30,  he urged the international community to help rescue his 74-year-old sister. On May 29, police from Changning District, Shanghai City, went into Lin’s house without permission and arrested her. Lin Qiu-Peng is a 74-year-old Falun Gong practitioner living in Shanghai.