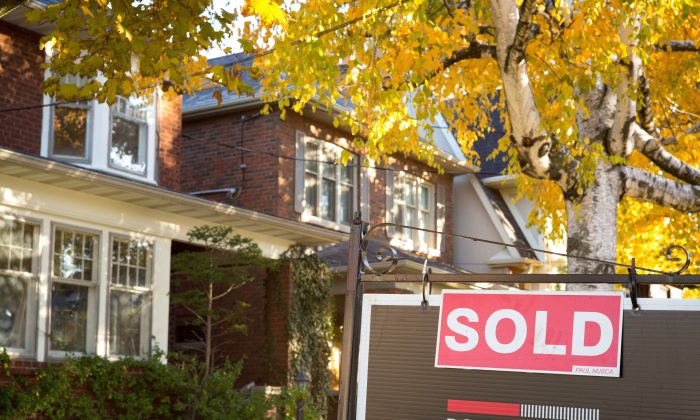 A sold sign in front of a west-end Toronto property on Nov. 4, 2016. (The Canadian Press/Graeme Roy)
Canada

TORONTO—The top reason why foreign buyers from China want to get into the Canadian housing market is education, not investment, according to data from a popular global real estate listings website.

Figures released March 7 by the Chinese website Juwai.com in partnership with Sotheby’s International Realty Canada found that schooling was the primary motivation for potential Chinese homebuyers who viewed property listings in major Canadian cities in 2016.

It found that housing needed for educational purposes was the most cited reason why 46 percent of Chinese users were looking at properties in Montreal, followed by 44 percent in Vancouver, 41 percent in Toronto, and nine percent in Calgary.

The second most common motivator for the interested homebuyers was “own use,” which could mean the home would be used as a second or third property. Sixty-two percent of those looking for homes in Calgary cited this was their main reason, followed by 37 percent for Toronto, 25 percent for Vancouver, and 34 percent for Montreal.

Investment was the top reason listed by a quarter of home seekers, with 27 percent saying it was the main reason for their property searches in Vancouver and Toronto, 23 percent in Montreal, and 21 percent in Calgary.

The data also indicated that the majority of Chinese property searches were for Canadian homes priced below $655,050.

“While homebuyers from mainland China have been identified as a notable segment of foreign purchases within the luxury property markets of Vancouver and Toronto, Juwai.com data dispels the assumption that Chinese interest is limited to the high-end segment,” said the report.

“Instead, it implies that conventional real estate dominates demand.”

The data also found that Canada ranked third by users as the most popular destination for international homebuying, after the United States and Australia.