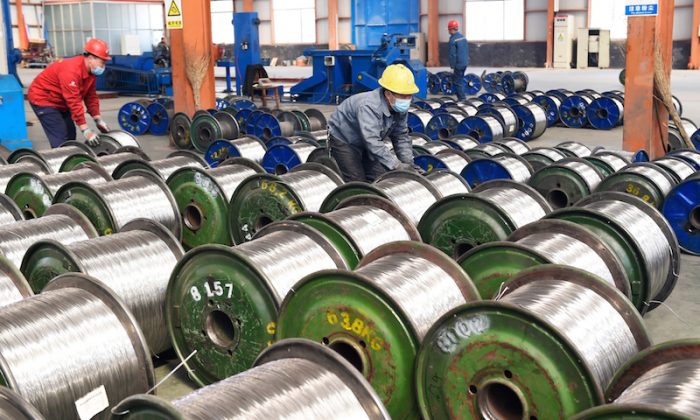 Workers move rolls of aluminum at a factory in Zouping in China's eastern Shandong province on April 7, 2018. China said on April 6 it is ready to pay "any cost" in a trade war after U.S. President Donald Trump threatened an additional $100 billion in tit-for-tat tariffs on Beijing. (AFP/Getty Images)
China

Chen Jihong, implicated in a massive metal warehousing scandal in 2014, has been sentenced to 23 years in prison. His company, Dezheng Resources, was fined over 3 billion yuan ($438 million) on Dec. 10.

Chen, 50, was accused of defrauding multiple companies of over 12.3 billion yuan ($1.79 billion) and engaging in fraudulent loans worth more than 3.6 billion yuan ($520 million). He was also accused of having paid a bribe of more than 8 million yuan ($1.16 million) to high-ranking ex-official Mao Xiaobing who was sentenced to life in prison for corruption last year.

The fraud, exposed in 2014, was estimated to have stung Western banks and trading houses as well as local Asian banks for more than $3 billion in total; Citigroup and Mercuria Energy Trading were two of the firms caught up in the fallout.

In addition to his 23-year sentence, Chen must also pay a fine of 2 million yuan ($300,000). Nine other staff at the company were given sentences of three to ten years in prison.

The court said that Chen had controlled and ran more than 60 domestic and foreign companies affiliated with Dezheng Resources. Chen founded Dezheng Resources in 2004. From November 2012 to May 2014, the Dezheng firms plundered billions using either fake certificates or fake warehouse receipts for materials such as alumina, aluminum ingots, and refined copper.

In addition, Chen swindled money by manipulating bank acceptance bills and letters of credit from 13 banks by illegally pledging the same cargoes of commodities multiple times as collateral, said the court.

According to the report, Chen did not appeal the verdict.

In the wake of the Qingdao fraud, the metals warehousing industry has made a push to go digital, with limited success; and further scandals have come to light.

From 2004 to 2006, Chen was on the board of a prominent state-owned mining company, led by Mao Xiaobing, a former high-ranking official in the Chinese Communist Party (CCP).

Chen’s fraud was exposed in 2014 when Mao was purged for taking bribes and embezzling public funds. Chen was then detained and under investigation.

In May 2017, Mao, who was a member of the standing committee of the CCP Qinghai Provincial Committee, was sentenced to life prison for accepting bribes of over 104 million yuan ($15 million) and embezzling 400 million yuan ($58.13 million) in public funds. Mao was also deprived of his political rights and had his personal property confiscated, reported the state-run media China Daily.

Mao’s court verdict said he took advantage of his multiple official positions to support Chen’s Dezheng companies in trading alumina. From July 2005 to January 2012, Mao extorted or accepted bribes from Chen on three occasions for a total of 8.3 million yuan ($1.21 million) and HK$100,000 ($14,535).