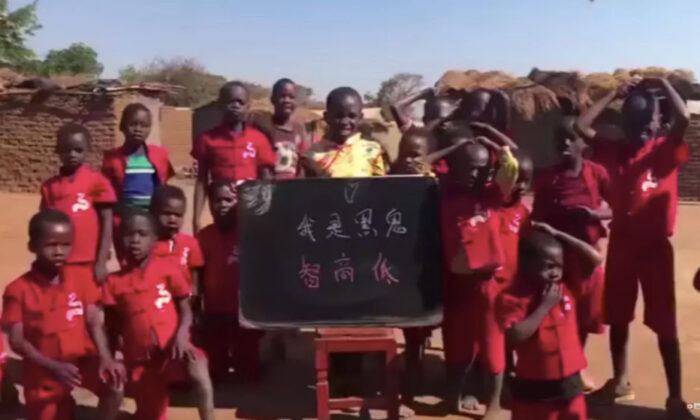 In a racist short video made for a Chinese audience, kids in a Malawian village unknowlingly chant in Chinese "I am a black monster and my IQ is low." (Screenshot via The Epoch Times)
Social Issues

In a short video, a group of African children in red shirts and shorts happily looked at the camera, chanting in Chinese: “I am a black monster and my IQ is low. Yeah!” They repeated these words with joy and enthusiasm, apparently not knowing what they were saying. The video was uploaded to Douyin, a Chinese video platform, in February 2020.

After more than a year of investigation, BBC reporters allege that a Chinese man named Lu Ke paid a nominal “salary” to these African children to make short videos mocking Africans, and then he sold the videos on Chinese online platforms.

Wanted by Malawi police, Lu was arrested in Zambia on June 20, and Malawian authorities are seeking to extradite him.

Beginning in 2015, greeting videos involving Africans speaking Chinese became a trend in China, a new business, and even an industry. These short videos can be sold online in China, ranging from $10 to $70 per video. Usually, several Africans wear specific costumes, holding a blackboard with Chinese phrases written on it. Sometimes they would sing and dance while chanting the Chinese phrases. However, not all such videos were well-intentioned.

BBC Africa Eye reporter Runako Celina, who used to live in China and speaks Chinese, was outraged when she saw a video with children chanting “I am a black monster with low IQ.” She worked with Malawian journalist Henry Mhango to track down the people responsible for the video.

Celina studied and lived in China for six years, and regards China as a second home.

It was a daunting task to identify the location where the video was shot. Africa is a vast continent, and similar scenes can be found everywhere. Celina noticed that videos featuring African children were mainly released from two Douyin accounts. The two reporters checked the videos one by one. After browsing through hundreds of videos, they finally found an important clue—a builder’s billboard in an inconspicuous position in a video scene. She called to confirm the location of the billboard. It was in Njewa, a village near Lilongwe, the capital of the Republic of Malawi.

Situated in Southeastern Africa between Tanzania, Zambia, and Mozambique, Malawi was once rated by the United Nations as one of the least developed countries in the world.

In another video, Celina also saw a Chinese identity card with the name “Lu Ke” written on it. She speculated that it was the name of the cameraman. She then found that Lu Ke has 14 “friends” on his Facebook account, one of whom is Swedish TV journalist Johan Ripas. It was Ripas who then told Celina that he had interviewed Lu Ke in 2017 when he went to Malawi to report on trade between the country and China.

The location had basically been confirmed. Celina and Mhango headed straight to the village of Njewa.

They learned from villagers that the Chinese man, known by the community as Susu, which means “uncle” in Chinese, declared that he wanted to bring Chinese culture to the local area and teach local children some basic Chinese. But some villagers pointed out that after a few years, these children had only learned a few Chinese phrases. With regard to Lu’s filming, most of the villagers got the impression that he might want to send these films to certain agencies in China, in order to help them get more supplies and poverty relief assistance.

Celina also learned that Lu would pay the children 50 cents each for a day of filming.

Another BBC undercover reporter, a Chinese national, was able to chat with Lu directly. Lu said that his record for shooting in one day was 380 films, and each one could sell for 200 yuan (about $30).

When the undercover BBC reporter specifically asked about the “low IQ” video, Lu’s first reaction was, “Yes! I made it!” But after pausing a few seconds, he suddenly changed his tune and said that it was taken by his friend who had already returned to China. Lu also wanted the reporter to delete the video from his mobile phone. “Don’t let black people see it, or you will be attacked.” During the conversation, Lu didn’t bother to hide his contempt for black people.

In the films he released, one black boy was apparently Lu’s star performer. Celina tracked down this boy, now 6 years old, whose name is Bright. Bright said that he was only 4 years old when he started making videos. He also revealed that “Susu” would pinch him or beat him with a stock when he made mistakes, and wouldn’t let him go home. Bright’s mother expressed sadness for her child’s suffering.

In the final stage, Celina and local reporter Mhango decided to meet with Lu face-to-face. Lu denied all the questions Celina raised. However, during the confrontation, he accidentally said the word “black monster” again.

The whole story has now been exposed in “Africa Eye: Racism for sale,” a BBC documentary released on June 20, which made international headlines.

As regards the “Racism for Sale” – investigative documentary on BBC News Africa, we are feeling disgusted, disrespected and deeply pained.

I addressed the matter during today’s #GovernmentFacesThePress session in Lilongwe.

Sylvester Namiwa, executive director for the Center for Democracy and Economic Development Initiatives in Malawi, said these videos are an insult not only to Malawians, but to black people across the globe.

“We have also extended our call to [the] Chinese embassy to make a public apology to all people of Malawi and the Black community in the world,” Namiwa said. “Failure to do so, we will be forced to mobilize Malawians to stage endless peaceful demonstrations.”

Under the pressure of public opinion, the Chinese Embassy in Malawi responded with a series of tweets from June 14–18, expressing “great concern” and emphasizing it has “zero tolerance” for racial discrimination. The embassy also promised to work closely with Malawi to properly resolve the issue.

Meanwhile, the Chinese Communist Party (CCP) and Malawi just signed the “Belt and Road initiative” agreement in March of this year.

Shortly after the documentary was aired, Lu, wanted by Malawi police, disappeared. The content in his Douyin account has since been emptied, and his Facebook account has also changed its name. It was later confirmed that he was identified and arrested in Zambia.

“He was arrested in Chipata, Zambia after fleeing the country through uncharted routes,” Malawi immigration spokesman Pasqually Zulu told AFP.

With regard to the Chinese embassy’s “zero tolerance” promise, current affairs commentator Dr. Yang Guiyuan told The Epoch Times that the Chinese regime is just trying to mitigate the current turmoil.

“It is such a viral video. How can the regime’s Internet police not know about it?” Yang asked. “If it was really ‘zero tolerance,’ it would have been deleted long ago.

“How does the CCP treat Xinjiang, Tibet, and Inner Mongolia? Which communist official stepped forward to stop the discrimination against these ethnic groups?

“As the Chinese saying goes, ‘When the upper beam is not straight, the lower beam is crooked.’ It is precisely under such wicked influence that some Chinese nationals tend to bully the weaker and less privileged groups.”