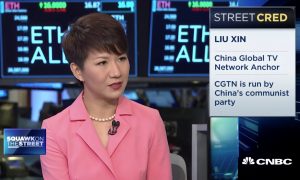 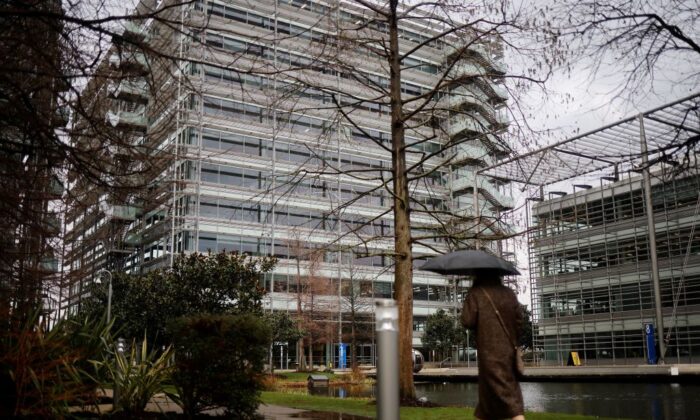 A pedestrian walks past an office block that houses the offices of China's CGTN Europe (China Global Television Network), in Chiswick Park, west London, on Feb. 4, 2021. The UK's broadcast regulator on Aug. 26 revoked the license of Chinese news network CGTN after finding its state-backed ownership structure flouted British law, and warned of punishment ahead after it aired an alleged forced confession. (Tolga Akmen/AFP via Getty Images)
Thinking About China

Gui Minhai is well-known these days as one of the “Causeway Bay Five.” He was kidnapped from his summer home in Thailand in late 2015. The case of Simon Cheng, a former employee at the UK’s Hong Kong Consulate General who was disappeared and tortured in mainland China, also received extensive media coverage and caused a diplomatic spat between China and the UK.

Following these latest fines, CGTN, previously known as CCTV, has now been levied over $420,000 by UK TV regulator Ofcom in less than six months. CGTN has also been slapped with an additional penalty of about $175,000 for their biased reporting on the Hong Kong protests in the same period. Considering that CGTN has somewhere between very few to almost no viewers in the UK, their continued and systematic broadcasting violations have become a rather costly affair.

However, it gets even more embarrassing.

Since 2019, CGTN has had a “digital first” policy as its proclaimed influence is based entirely on its social media presence: from YouTube videos to social media posts on Twitter and Facebook. CGTN is well aware that very few people—whether in the UK or anywhere else—actually watch CGTN. However, as CGTN aims to become a premier 24/7 English language news channel to rival CNN, BBC, and Al-Jazeera, from a prestige perspective it is imperative that they are broadcasted through regular (terrestrial) methods.

Earlier this year, as a direct result of an investigation carried out by Safeguard Defenders, CGTN had its license to air revoked in the UK in what is possibly the biggest blow any TV channel can suffer. Why? Although CGTN has always been controlled by the Chinese Communist Party in every practical term, China’s major media reorganization plan as announced in early 2018 moved all formal and direct control from a State to a Party organ, making it by definition a Party-media rather than State-media. In some jurisdictions, including the UK, Party-controlled or -owned TV stations are not allowed under any circumstances. In the end, the UK’s TV regulator had no choice but to revoke CGTN’s license.

To make it worse, this happened in the very jurisdiction CGTN had placed its biggest foreign production base, gone on a hiring spree, and planned its headquarters for its new Europe division.

On Aug. 20, CGTN set itself up for further embarrassment as it tried to counter this loss of its license (and prestige) by pompously announcing it was “back on the air” in the UK via one of the UK’s main TV providers: Freeview. However, inquiries and a brief investigation by Safeguard Defenders showed this to be untrue. Not only has Freeview not signed any contract with CGTN, no Freeview channel actually broadcasts CGTN. Instead, CGTN only managed to sign up a small internet-TV (IP-TV) platform to stream its content to its select subscribers over the internet—allowing them to circumvent any regulation as internet-TV is unregulated.

It is great news to see the UK TV regulator’s continuous action against clear-cut broadcast violations of its legal framework, clearly identifying CGTN as a repeat offender in broadcasting forced televised confessions. This is of prime importance in particular for the victims: Seeing CGTN struggle to get the respect it so desperately desires, directly acknowledges the hardships and violations they were put through.

However, these UK developments also put a spotlight on the failure to act in other countries, in particular the United States.

The U.S. Federal Communications Commissions (FCC) has since long received a comprehensive complaint against CGTN/CCTV for the systematic airing of the very same offensive broadcasts, as well as others systematically aired over a period of six years. Yet the FCC has failed to act or even launch an official inquest. The FCC admittedly has a much narrower mandate to act compared to the UK’s Ofcom or Canada’s CRTC, but they do have the power to act against channels that air direct lies or the intentional distortion of facts.

The United States should move away from small-scale and symbolic political actions to counter CGTN and to start applying its existing rule book on them and their broadcasts. This would have far greater consequences, which could not be challenged as politically motivated. Our regulatory bodies exist for a reason: to uphold common rules on equal ground. It is high time those rules start being applied consistently on Chinese operations in our countries.