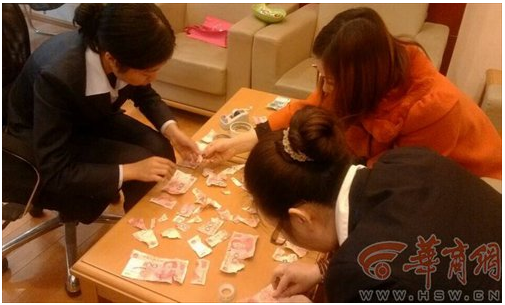 Screenshot showing employees at a branch of China Construction Bank reassembling cash torn up by a young by in Shaanxi province. (Screenshot/hsw.cn)
China

A 4-year-old boy in Shaanxi Province tore up 3,585 yuan (nearly $600) in cash while his mother was distracted by domestic chores.

“I was busy cleaning and did not notice what he was doing,” she said, according to hsw.cn. “By the time I noticed, he had already torn up the money into pieces, some of which were as small as a fingernail.”

The woman, whose surname is Yang, took the remnants of her son’s playtime to a branch of China Construction Bank in Xi’an, where five members of staff pieced 39 bills back together.