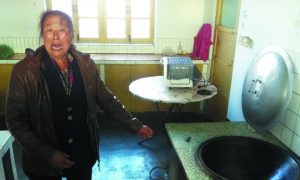 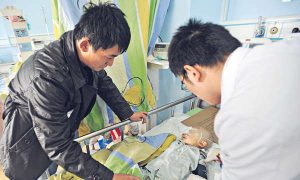 In China, Toddler Falls From 25th Floor, After Girl Beats Him
0
China

A 9-year-old girl in Yunnan Province has been in a critical condition since early December, after a boy from her school shot her in the head multiple times with a modified nail gun.

Ying (alias) and her family have been seeking medical assistance since she was injured on Dec. 2, but the surgery she needs is very expensive and also risky, according to the Beijing Times.

The girl’s mother, Duan Zhenzhen, told the newspaper that Ying went to do her homework with several classmates at the house of the boy, whose name is Hui. Half an hour later, Hui’s mother came to tell her that Ying had been shot.

“I thought she was talking about a toy gun,” Duan said, according to the Times. “When I saw my daughter, I fell to the ground; she was covered in blood. The flesh on her nose all the way up to her left eye was gone.”

Ying told her mother that she had been helping another classmate memorize their homework, and had not got into an argument with Hui or any of the others. She added that Hui had said, “I need a target to hit,” and shot her before she could react.

Hui’s mother told the paper that she and her husband went to a friend’s place that evening, and left Hui at home. She went back after a neighbor said there was trouble at her house, and found Ying with her face covered in blood.

The other children told her that Hui had shot Ying with a modified nail gun. “The gun that we hid in our bedroom was lying in the living room,” said Wang, who added that her husband bought it to fix windows, and also claimed it could be used to shoot birds.

Since the incident, the boy’s father has been helping the police with their investigation, and his mother has been busy raising money for the surgery. The father was arrested on Dec. 19 for illegal possession of a firearm, and the boy is not being held criminally responsible as he is a minor.

“There is no way we come up with that kind of money. This family is ruined,” she said.

Duan’s husband has had mental problems for years, and she has been working odd jobs to support the family. She said she has received money from Hui’s parents, and donations from neighbors and others who learned about their tragedy from the news.

Dr. Shen, a pediatric surgeon at Peking University First Hospital, told the paper that Ying is currently in a stable condition with extensive trauma to her nose, eyes, and facial skin. He said there still are hundreds of metal objects in her head, and the surgery required is complex and risky.

“We won’t be able to remove all the metal objects and she could become infected at any time. She may lose her left eye,” Dr. Shen added. “After the surgery, she may suffer epilepsy, cerebrospinal fluid leakage, and other complications.”