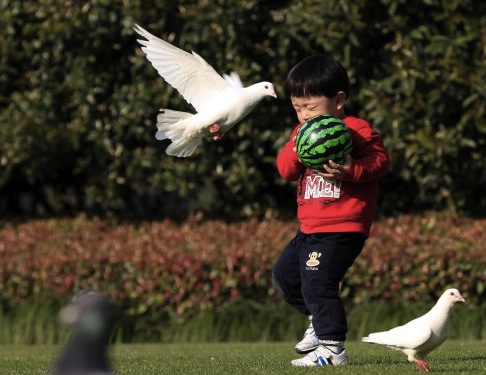 A new case of H7N9 was confirmed in Shandong Province, the 4-year-old son of a bird flu patient in Zaozhuang City. The photo shows a boy playing with pigeons at People's Square on April 7, 2013, in Shanghai. (ChinaFotoPress via Getty Images)
China

The 4-year-old son of a bird flu patient in Shandong Province has also contracted the H7N9 virus, according to local health authorities.

The boy had a fever on Saturday and tested positive for the virus the following day. He was hospitalized in Zaozhuang City and was in a stable condition at the time of the health department’s report.

His father was the first person in Shandong to be diagnosed with H7N9. This is one of several “family clusters” to be acknowledged, although the local health department says there is no evidence of human-to-human transmission.

Although the father has had no contact with chicken, the Jinan Times reported that the family lives near a live poultry market.

The new bird flu strain has reportedly affected 126 people so far, with the 24th death in Shanghai on Monday. The number of cases rose by five in four different provinces on Sunday, according to regime mouthpiece Xinhua.

Last week, the virus was recorded in Taiwan, after a businessman visiting the mainland returned home. Hong Kong immigration and hospitals are taking extra precautions as tourists from the mainland arrive for the Labor Day holiday.

Translation by Hsin-Yi Lin. Written in English by Cassie Ryan.