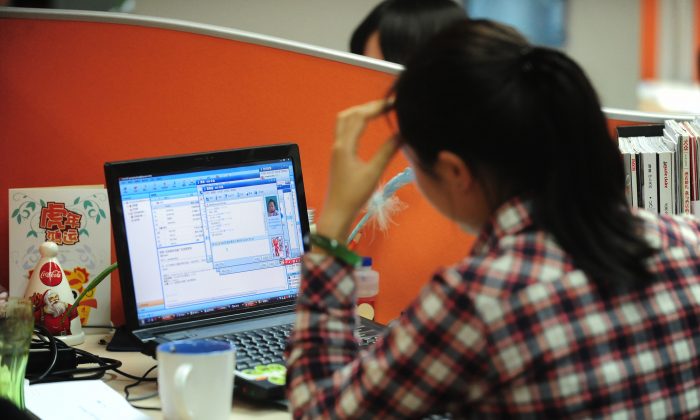 A woman works online in her cubicle at an office in Beijing on February 4, 2010. (Frederic J. Brown/AFP/Getty Images)
China

A Chinese travel company has become the subject of online attention after it fined over 200 employees who failed to leave comments on their boss’s social media posts.

Zhang Ming, the general manager of Shandong Jiahua Culture International Travel Agency in Shandong Province, was an avid Weibo fan. Not only did he regularly post articles on the popular Twitter-like Chinese social media site, he asked the entire company to follow, comment, and “like” his posts, reported the state-run newspaper Beijing Youth Daily.

Employees were also expected to read out Zhang’s updates every morning. “We have one employee who leads the others in a read-along using a speaker, and everyone takes turns to lead the session,” one employee told Beijing Youth Daily.

The posts, which are mainly on company activities or some inspirational quotes, received little interest from the hundreds of staff members, the majority of whom simply left a “like” emoji to get by.

The content contained “nothing significant,” said a senior staff member who requested to remain anonymous.

An employee was finally fed up after he and another 200 staff were recently fined 50 yuan (about $7.60) each for not commenting on posts. One worker was fined 150 yuan in a month, according to Beijing Youth Daily.

“I was completely dumbstruck when I got the penalty notice,” the unidentified worker, who had worked at the company for half a year, said on Weibo. The worker also published a long list of punished employees. “I never knew the company had this kind of rule, nor would I have believed it ever to have existed anywhere on earth,” he wrote.

Zhang Ming responded by declaring the complaint “not straightforward” and that it “defamed Jiahua behind its back.” The company, he wrote on Weibo, relies on “a large number of followers and contributors who can identify themselves with the company culture and management style. …Those who idle and only take wages but don’t work should just leave the company.”

Over a Thousand Chinese Officials, Tasked With Fighting Poverty, Punished for Incompetence

Zhao Ruxin, Jiahua’s marketing manager, confirmed it to be an established rule but claimed it was a way to motivate workers and enforce company culture.

“The young people lack a positive work attitude, they need a ‘tutor’ to guide them in working and forming the right work concepts,” Zhao told Beijing Youth Daily. “Commenting under the leader’s Weibo posts is a good way to promote company culture.”

Zhao claimed that most workers approved of the rule. “Maybe new employees and those who cannot cope with pressure don’t consent and consider it a burden,” he added.

Several staff interviewed by Beijing Youth Daily contradicted the manager’s views. “No one dared to stand out and raise objections,” one said. One of them mentioned that he had reported the issue on the mayor’s hotline, but nothing changed.

“Only administrative organs or authorized institutions can implement fining as an administrative penalty, “Han said. “The workplace has no right to fine workers for not obeying the rules.”

This has not been the first time the company has used fines to punish employees. Earlier, staff have had to pay up for not using bags bearing Jiahua’s logo.

Other companies in China have adopted public humiliation to “motivate employees.” A decoration company, for instance, made poor-performing sales reps eat bitter melon in front of coworkers, while another firm had female employees crawl about in public on their hands and knees while being directed by a man waving a red flag.