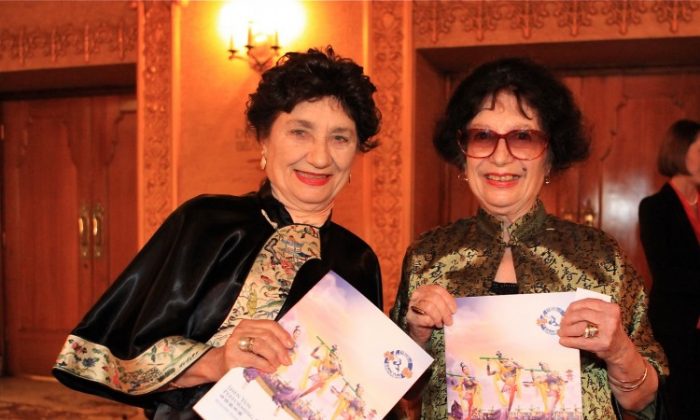 MELBOURNE, Australia—Born in China to European parents, Ms. Sandell and her sister Dimitra Talbot were raised there and still speak fluent Mandarin.

Ms. Sandell who said her Chinese name is Mei Gui, attended Shen Yun last year and this year she brought her sister to see the show as well.

“I think it is spectacular. … the costumes are very clever—it’s beautiful. I love the ladies. The rose dance [Flower Fairies] is very beautiful and the snowflakes [dance] Snowflakes Welcoming Spring,” said Ms. Sandell.

Her sister, Ms. Dimitra Talbot, whose Chinese name is Zu Lan, also expressed her admiration for Shen Yun saying, “The show is very nice, exquisite. Very clever and I love the women’s dancing. The pink and the white were different shades and the rose dance was beautiful, and the Lotus Leaves. The snowflake [dance] was very good.”

Ms. Talbot, who studied and played the piano for over 10 years, also found the music interesting in the way the modern Western instruments harmonised with the ancient Chinese ones.

“The Chinese instruments and some of the Western music intertwined—very nice.”

The Chinese instruments featured in the show include the erhu, dizi, pipa, and suona. All Chinese instruments are classified by their material construction into eight categories: jin (metal), shi (stone), tu (clay), ge (hide), si (silk), mu (wood), bao (gourd), and zhu (bamboo). Collectively, these eight classifications are known as the ba yin, or “the eight sounds.” All materials used to make these instruments originate from nature, and the significance and symbolism of each is closely tied to its natural origin.

Ms. Sandell, who recently saw a TV program about how the instruments were made said, “It is beautiful. Beautiful Chinese instruments—very clever.”

In conclusion, she said, “It [Shen Yun] brought me back to China where I was born and grew up.”

Her sister, Ms Talbot, also expressed her familiarity with China and its culture and spoke about coming away from the show with a positive message.